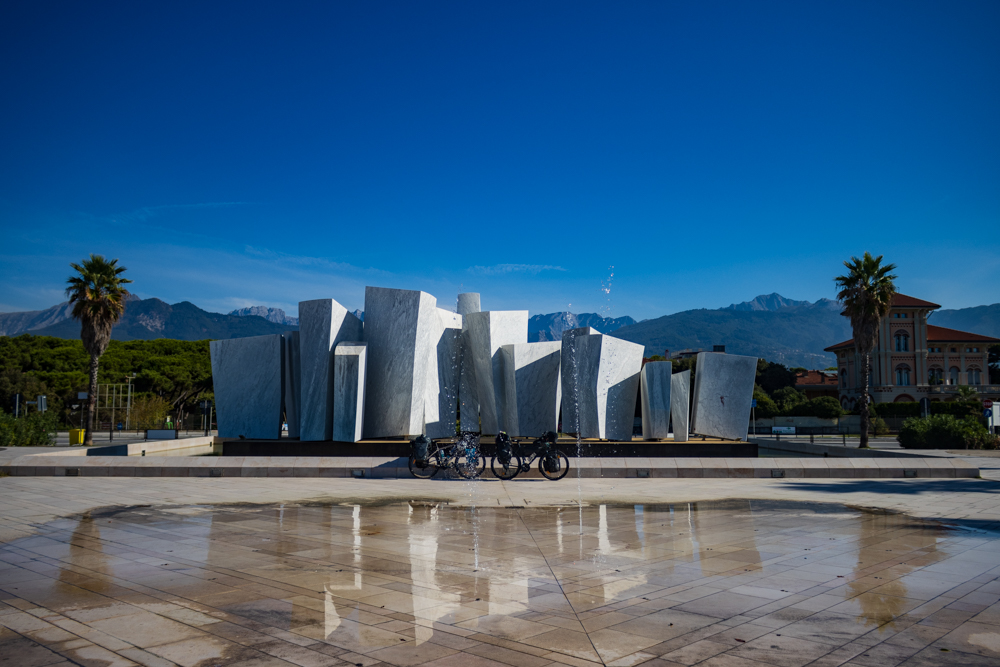 Bikes posing in front of a fountain, some art and the impressive mountains at Conca d'Oro beach.

Almost like a tradition of the last stages we stood up early before this stage when it was still dark. When we were finished with breakfast and prepared our bicycles the sun rose and it was time to cycle in the direction of the mountains. We still wanted to follow roughly the Eurovelo 5 which in this area is called Via Francigena. After a few kilometers through the city of Viareggio we turned onto a road which led us along the coastline.

Easy cycling along the coastline

On this street we cycled for almost 40 kilometers. The area was full of hotels, beaches, shops and everything what a tourist needs. Palm trees were planted along the road and gave us a tropical feeling. Because it was end of September there were not much tourists here and sometimes the shopping streets looked like ghost towns. The season was almost over. However, many tourists also means good infrastructure, so for many kilometers we finally after all that kilometers in Italy had a bicycle path and also saw a lot of cyclists and even a few bikepacker.

Near Massa we found a little cafe next to the coastline and stopped for a coffee and “cornetti”. Of course, it was also time for some photos and to say goodbye to the beach. The coastline road was very flat without any climbing so we made great progress. But on the opposite side of the sea we saw the massie Apennine mountains and knew that we had to climb them some when. But for now we could enjoy easy and fast cycling along the coast.

Leaving the coastline and Coming closer to the “Appennini”

When we came closer to Sarzana we left the coastline and followed the river Magra into the inland. We crossed the city and some other towns until we came to Santo Stefano di Magra where we stopped at a route closure. So we took a detour and cycled on a local bicycle route along a canal which led us into a remote area which was actually pretty nice. But after some time we had to turn onto a major road again. However, there was not that much traffic going on, so cycling was still good.

From this on a long but very moderate climbing passage started. We still cycled along the river Mara mostly through a forest area. Often we had nice views on the mountain range of the “Appennini”. In the city “Viallafrance in Lunigiana” we made another stop and ate some snacks and of course took some photos from the cute town and the surroundings. During our last kilometers we met another German Bikepacker who also travelled north wise. Shrotly after that, we arrived at our destination Pontremoli.

Enjoying a wonderful apartment with view on the mountains

To bridge the waiting time until check-in, we enjoyed some ice cream in front of our apartment. Then we could enter the apartment and it was incredible! It was on the 5th floor with a big rooftop terrace. Also the apartment itself was so gigantic with three rooms, a big kitchen, and a huge bathroom. Even a washing machine was present – and how happy we were to find even detergent to use 🤩. After a quick shower we went to the supermarket and Alina cooked some nice dinner (which was so much, that we still had some curry rice for breakfast 💪). After this we enjoyed a beautiful view from the rooftop above the town and the surrounding mountains. We were lucky to have almost full moon and it was a perfect night.