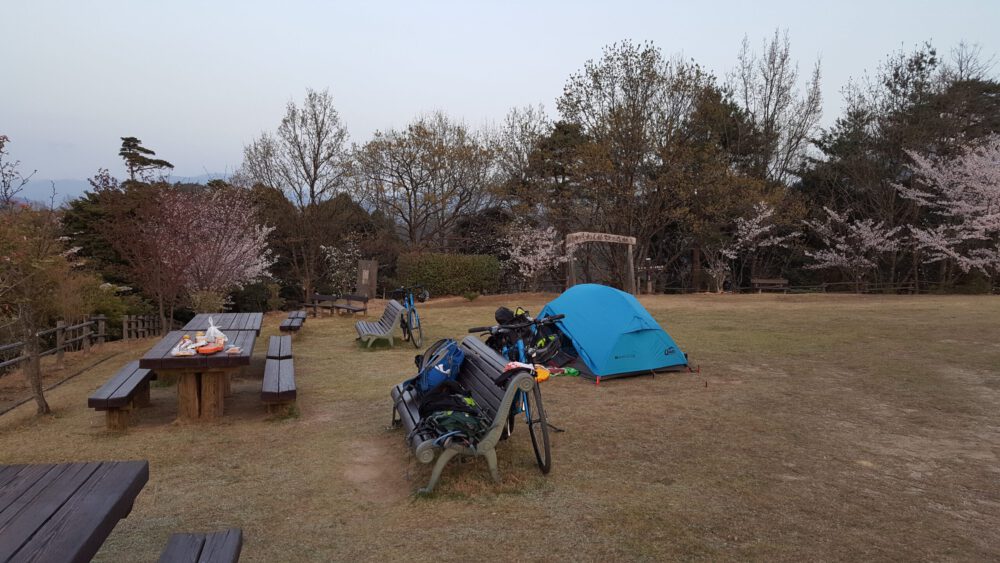 Ehime camping ground - our home base.

Before we started our tour we travelled along Japan. We rent our bicycles in Osaka and took them via train to Beppu, where we stayed a view days. Then we took the ferry from Beppu to Yawatahama to start our tour. Due to the late departure of the ferry, it was almost noon till we started from the port in Yawatahama. First, we had to climb some mountains, but in and around Yawatahama were a lot of bicycle roads which made the ride convenient. After some kilometers in the prefecture of Ehime we arrived at the north coast of Shikoku. There we could follow the coastline for about 40 km. It was a relaxed cycling and we had a lot of nice views over the Seto Inland Sea.

The last kilometers of the tour we had a lot of climbing passages to master. It was really tough. We were almost exhausted and it also got late. Even if the nature was very beautiful in the end, for example we drove through a bamboo forest, we could no longer enjoy it. Then finally, our navigation gear said we arrived at the Ehime Camping Ground. But where was the camping ground? We learned it the hard way. Even when Google Maps calls it a camping ground, it does not mean it is a camping ground like you would expect it to be. So it was more like a barbecue place. Good for us we had water und restrooms, but no convience store in sight. We only had some chocolate left to eat – not the best dinner. But the great view over Matsuyama at night consoled us. As we were very tired, we quickly fell asleep despite a slight hunger. The next day we were able to restore our energy in Matsuyama.

This is not the exact path we took. We did not record this tour, so we tried to create the track file from our memory. Thus, this resulted in about 60 kilometers.