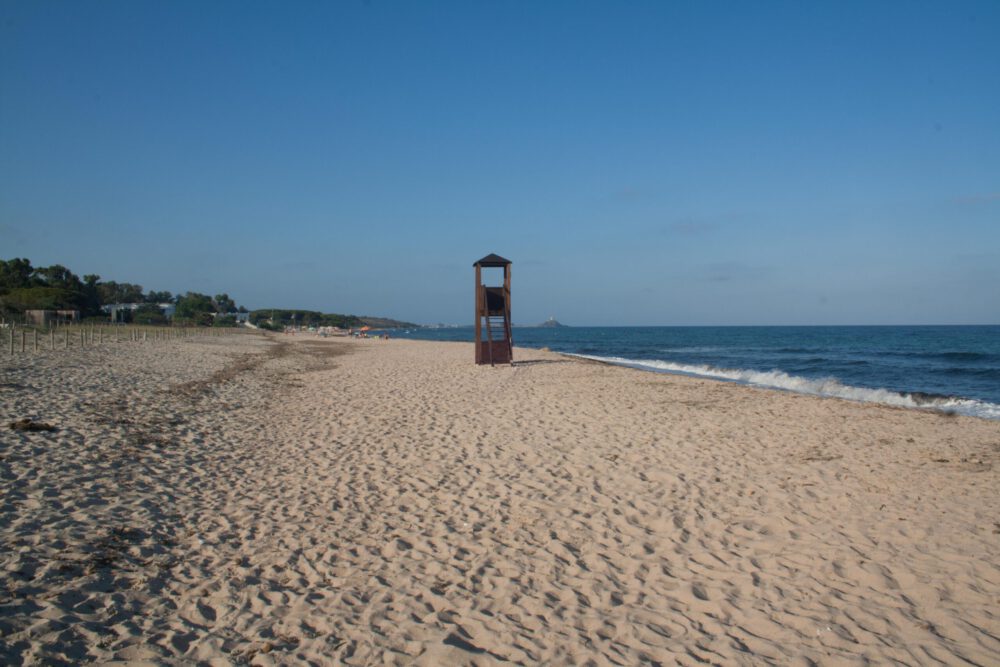 On our free day in Gonnesa we slept a bit longer and then tried to get some breakfast at the agriturismo. But it turned out that there was no breakfast for us as we should have told them the day before that we want some. So we went into the city of Gonnesa desperately searching for a breakfast spot. However, it was probbaly a bit late. So we just had some small snacks in the Alex café. We talked to a nice german woman living there after she married a sardinian man.

Lateron we walked around the city and bought some stuff in the supermarket for the next tour. We finished the day with relaxing at the swimming pool of the agriturismo and some seafood at the Piedra Del Sol Restaurant. Before going to bed we already prepared some of the stuff on our bikes to be ready to head over 80 km to Santa Margherita the next day.

We had just some quick breakfast at our room in the agriturismo before sitting on the bikes. First, we cycled over nice small gravel paths along sheep flocks and their sheperds. Then the road got a bit boring being straight and only flat. However, we could make fast kilometers with these conditions.

Tough mountain in the end before Santa Margherita

Before we arrived our campsite there was one mountain again in front of us. After all that mountains before we had kind of routine already. Like when to do breaks, what to eat in between and how much to drink during our way up. At the top of the Monte Maria we made a longer pause, visiting some information about the Antico Cammino Dei Carbonai. Probably a really nice trekking route (in spring or autumn😉).

After the down hill it was just a few more kilometers on an almost flat road. Thus, we arrived Camping Flumendosa in Santa Margherita on time and still had some time to visit the beach.

We had a good relax day at the campsite as they had a nice swimming pool with free sun loungers and a bar around. The beach was next to the campsite and we stayed for some hours at a beach bar until they closed. We played cards in the sun and had some tour finalization beers (Ichnusa non filtrata of course!).

They day after the relax day we had one last challenge to manage. Bring the bikes in one part over to Cagliari. As the streets to the capital city of Sardinia are quite busy and also the surrounding is more or less really indrustrial and not nice to drive through, we decided to take the bus. It was not sure if we could take the bikes on the bus (depends on bikes already present there…). But we were lucky and after some demontage we were allowed to put them in the luggage storage.

From the main bus station in Cagliari we rode over to our hotel to put our luggage there. So we could ride just with the bikes over to the branch of Sardinia Cycling in Quartu Sant´ Elena.

This is not the exact path we took. We did not record this tour, so we tried to create the track file from our memory. Thus, this resulted in about 85 kilometers.