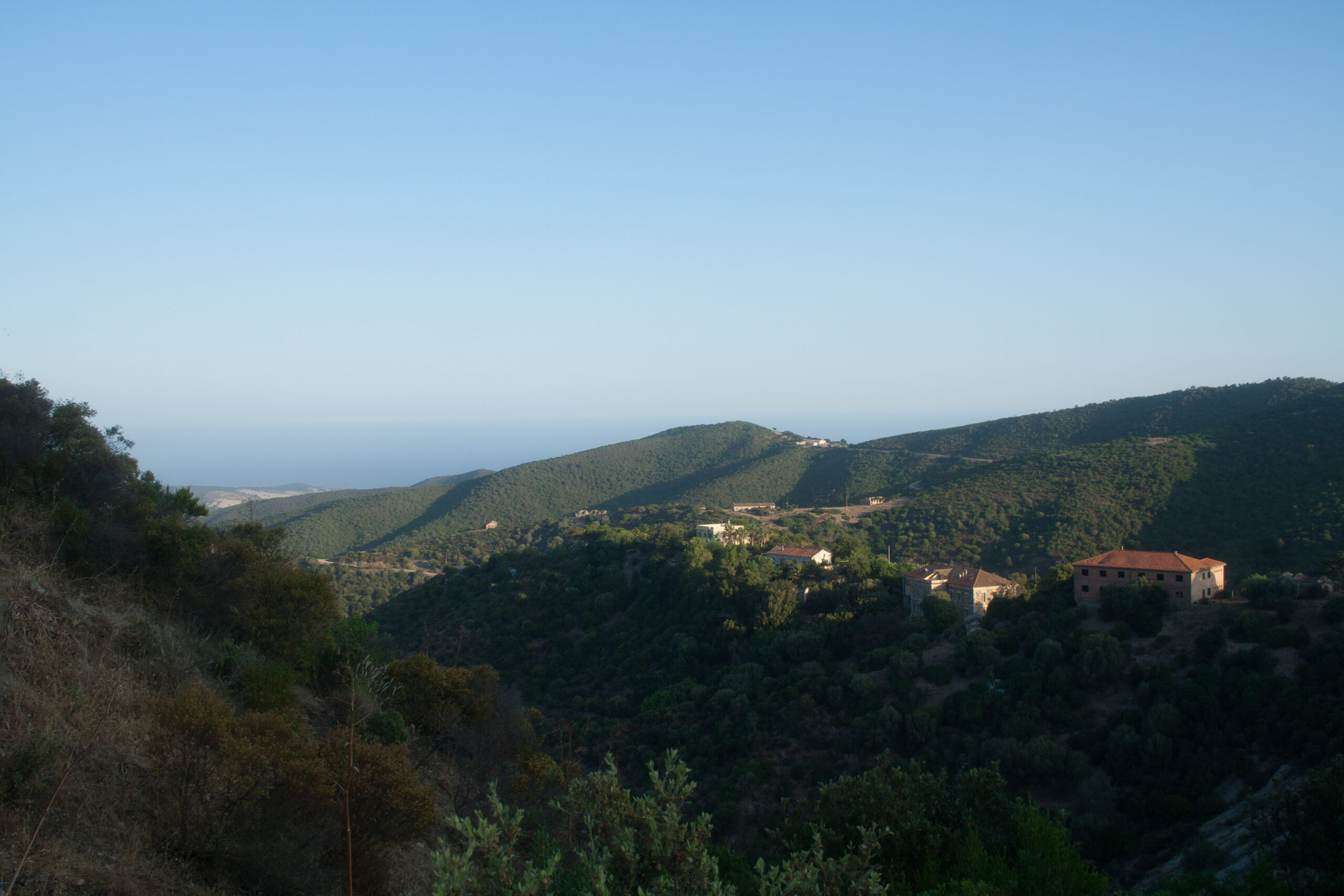 View over the mountains at Costa Verde in the direction of Dune di Piscinas.

We had a relaxed beach day at the Costa Verde. From our Campsite Sciopadroxiu we could walk some minutes down to the wonderful sandy beaches of the Spiaggia di Piscinas. We rent some sunloungers and an umbrella. So we could sleep in the shadow with the wind of the rough but beautiful ocean around us. Once in a while we cooled our selfs by a little swim. At the campsite we finished the day again with a nice Pizza and some seafood in the restaurant. We went to bed early as we definitly wanted to start early the next day before the sun rises. We had the mountain in mind we would have to tackle to come to our next target, an agriturismo in Gonnesa.

Peaceful trip through the mountains

We were quite fast in the morning with packing things together and were on our bikes when it was still almost dark. We cycled in the silence of the remote landscape again passing the ruins of the mining town Ingurtosu and all the way up again to reach the SS126.

The only sounds you could here once in a while were bells from the goats on the fields around us. It was good that we started so early as this part would have been really nasty in great heat. Reaching the top of the mountain we were rewarded with a stunning view over the wide area.

Fluminimaggiore in between two mountains

Back again on route SS126 we rolled quite easy. It was an up and down, sometimes with shadow from pine trees along the road, and sometimes in the sun. From the highest part of the SS126 the probably most stunning part of the whole tour began. A really long down-hill on good asphalt streets with hardly no traffic and a view over a incredible wide valley. We were on the way down to Fluminimaggiore, a city in between the mountains. Thus, we would have to cycle up again after passing the city.

After a short supermarket stop and sun blocker application we were ready for the next mountain. It took really long and we did a lot of breaks in between as it was already midday and heat time again. But after a a huge amount of sweating and swearing we managed to reach the Genna Bogai pass (549 meter).

Final part to the agriturismo in Gonnesa

As always, after a hard climb there is a down-hill part. During rolling down the mountain we saw an older couple going up this way and we could really feel with them. They even seemed to have some more stuff on their bikes than we did.

Getting nearer to Iglesias the landscape was more industrial and the road got bigger. It was not so nice to ride with the bikes but we had to pass the city as the agriturismo was located somewhere behind it. In the little town Gonnesa we found it a bit outside. But as it was late afternoon (prolonged siesta?) noone was at the Riad. Thus, we had to wait and wait and wait in the heat…We walked around to visit the area, played with little kittens running around there, slept a bit. At sometime a guy arrived and told us that check-in would only be possible later. Thus, we asked for a restaurant recommendation to at least eat something while still waiting.

After a Pizza in the Ristorante Pizzeria 13 we went back and could do the check-in. The agriturismo was a little spooky as it seemed that we were almost the only guests. But we were just happy to have a air conditioning and a good shower.

This is not the exact path we took. We did not record this tour, so we tried to create the track file from our memory. Thus, this resulted in about 60 kilometers.