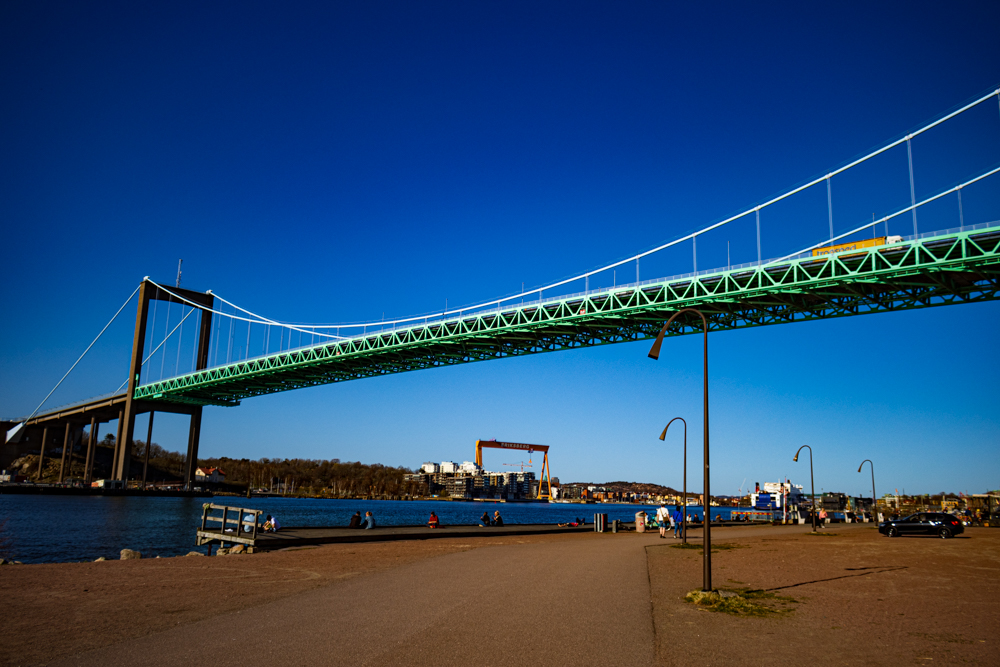 Älvsborgsbron - we arrived in Göteborg!

The night at the camping ground in Frillesås was cold again. Not freezing cold but still cold enough to wake up. We wanted to get up at 7 in the morning. The sun was already shining but it was still very cold. So we stayed in the tent and checked our options for today. In the end we decided to try the last approximately 100 km to Göteborg on the Kattegattleden. Due to the temperatures and the Corona situation we decided to stay some nights in an appartment. This would also give us some time to explore the city. So we already booked that in the morning to be safe to get something not too expensive.

Afterwards we wanted to eat breakfast and use the kitchen for that. But to our (bad) surprise the cards we got for access to the facilities on the campground declined the access. So we went again to the table at the playground next to our tent. At least we could warm up with some hot tea. After finishing breakfast we dissembled the tent and packed our things. When we got ready, it was warm again and we could already take off some layers of our clothes.

After a few villages on the first kilometers we came closer to the E6, a highway which leads directly to Göteborg. The streets were busy and we had to change from time to time from bicycle road to main road. Finally, we reached the city of Kungsbacka. At a first glance it looked just like an ordinary city and wasn’t something special. Although we had read several times that it should be very nice. As it was time for some break we just took the first chance in a park and had some snacks.

After that we crossed the center and finally saw the really cute old town with some food trucks and small shops. Good for us that we already ate before 😝. The Kattegattleden led as through the city to a small bridge over the Kungsbackaån river with hand-made hearts attached to the railing. There was also a park along the river and everywhere nice old swedish houses. It was very lovely and we could watch some birds. Too bad we did our break before we entered the nice part of the city.

Up and down – and up again…

After Kungsbacka the Kattegattleden does not lead directly to Göteborg, but does a detour about Gottskär. The road had many ups and downs, so it was quite intense to move forward. We had to cycle next to a very busy main road which was also loud. That reminded us of how quite the Kattegattleden was before and how relaxed you could cycle most of the time. The headwinds in this area got stronger and there was not much to see around. So it was not only physically exhausting, but also mentally.

However, lateron the path led us through a nice golf academy where we could see a lot of beautiful nature and also the traffic noises disappeared. We searched quite a long time to have our lunch stop, but there were no real sitting possibilities. Finally, we came to Särö and found a table and benches at a playground. Of course, next to a golf course (too exhausted to take photos of that🤷‍♀️).

Göteborg – The end of the Kattegattleden

After our break we had around 30 km to go. We were glad that the path got again closer to the coastline. We had some beautiful views on the sea and stopped for a short photo stop at Billdal. Many Swedes were enjoying this sunny day on the nice trails around the coastline. After some more kilometers we cycled below the impressive Älvsborgsbron bridge and finally entered Göteborg. The streets got very busy again. Also in Göteborg you have roads for bicycles only. But there were a lot of cyclists and pedestrians on the road (also other crazy non-motorized vehicles…), so you have to stay really focused on the traffic. Also a lot of construction was going on in the city which didn’t make navigation easy.

The Kattegattleden ended right before the central station of Göteborg. A quite unspectacular and inconspicuous sign marked the end of our 390 km tour along the Kattegattleden. We were quite tired, so we made a selfie of us at the sign and continued the tour to our apartment. After a hot shower, some nice dinner and a few episodes of Brooklyn nine-nine (🤩) we fell asleep almost immediately in our bed.