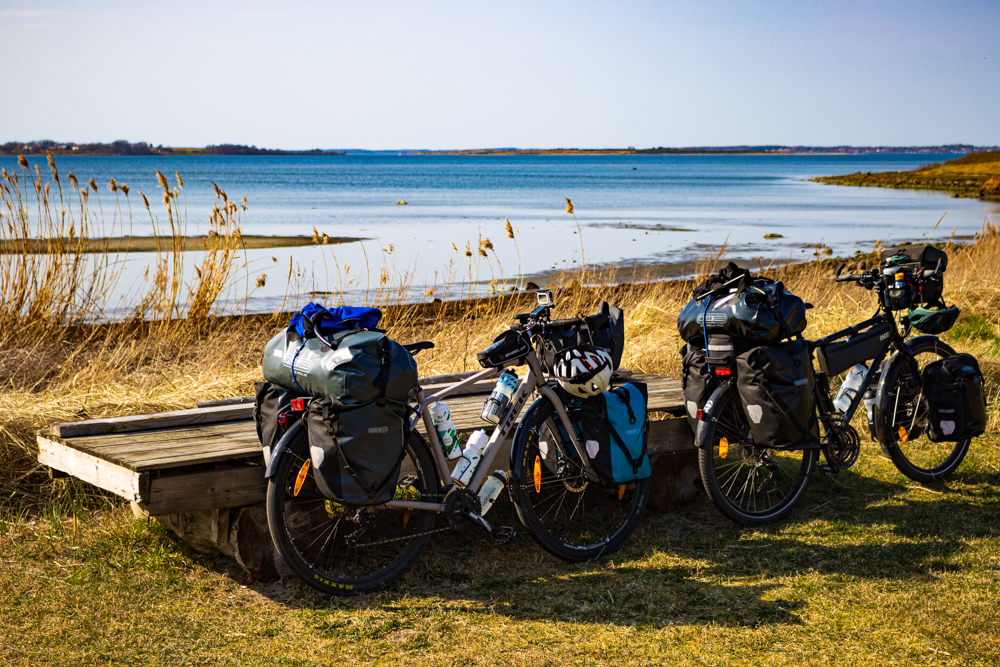 Afternoon snack stop at a remote beach near Frillesås.

In Falkenberg we had two very nice and chilled rest days. On the first day we walked along the river Ätran to the center of the city. We saw a lot of birds (mostly ducks – some of them fighting!). In the center we did a little sightseeing tour where we visited a church, a little art park and the famous bridge Tullbron. Afterwards we continued our walk along the river and ended at the Skrea Strand. There we had a delicious ice (waiting quite long in the “corona” lane outside was worth it) and took a nap at the beach during a sunny afternoon. Later we had super delicious Sushi at a Thai restaurant. On our way back we passed the football stadium of Falkenberg where we did a little photo stop.

On the second day we just chilled at our hotel. Alex had a little pain in his feet, so we took the time for regeneration. It was also time for some laundry. Perfect with a terrace and the sunny weather. Due to the outside spot we also could cook some pasta with our stove. Afterwards we made everything ready for a relaxed start at the next morning.

A warm start at Falkenberg

The hotel in Falkenberg provided breakfast boxes for the guests (also veggie and gluten free stuff 🤩). They were delivered to the room. So before we started our tour, we could eat relaxed in our studio. It was a cloudy day but the temperature was quite warm and around 17° C. So prefect cycling conditions. The first kilometers led us through Falkenberg. After we left the city we entered a not so populated area. We came along different small villages. At the beginning there were still extra bicycle paths and from time to time we had to use the main road. But for a very long part we were just on the straight main road with the cars. Being happy to leave this road we came closer to Varberg.

In and around Varberg were more bicycle roads. The city itself also had much to offer. We could follow the path along the coastline and had beautiful views at sea. Also in Varberg is a big fort where we stopped to take some pictures of course. We left Varberg through the industrial area and followed the Kattegattleden. For the next kilometres the area passed us by. There was not much to see, but it was easy and fast travelling.

Lunch with the birds and professional “birders”

A bit later we searched for a good spot for lunch. We were lucky that the Kattegattleden passed the Naturum Getterön. A great spot for bird watching. We found a nice place to sit down and could go to the spots around to watch some birds. In fact, we were a bit underquipped surrounded by all the bird watching experts with high-tech telescopes and statives. However, the view was stunning. Travelling further we passed again and again grass areas with small ponds and a lot of birds.

A few kilometers after Bystaden we came along the gigantic modern softwood kraft pulp mills called Värö and also the nuclear plant of Ringhals. In general, you could see a lot of big industrial complexes in this area which suddenly appeared in a seemingly deserted area. After the plant our path led us through nice forested area. On a remote beach stop shortly after Norvära we checked out our opportunities for the night. We found a camping ground not far from us in Frillesås. The night should be not that cold so we drove there and booked one night at Vallersvik Camping Hotel.

Due to the convenience of an oven we bought us some vegan frozen pizza at the supermarket and had a nice dinner (at the table of the childrens playground next to our tent 😁). Afterwards we went to the nearby beach and watched the sundown before we went to bed.