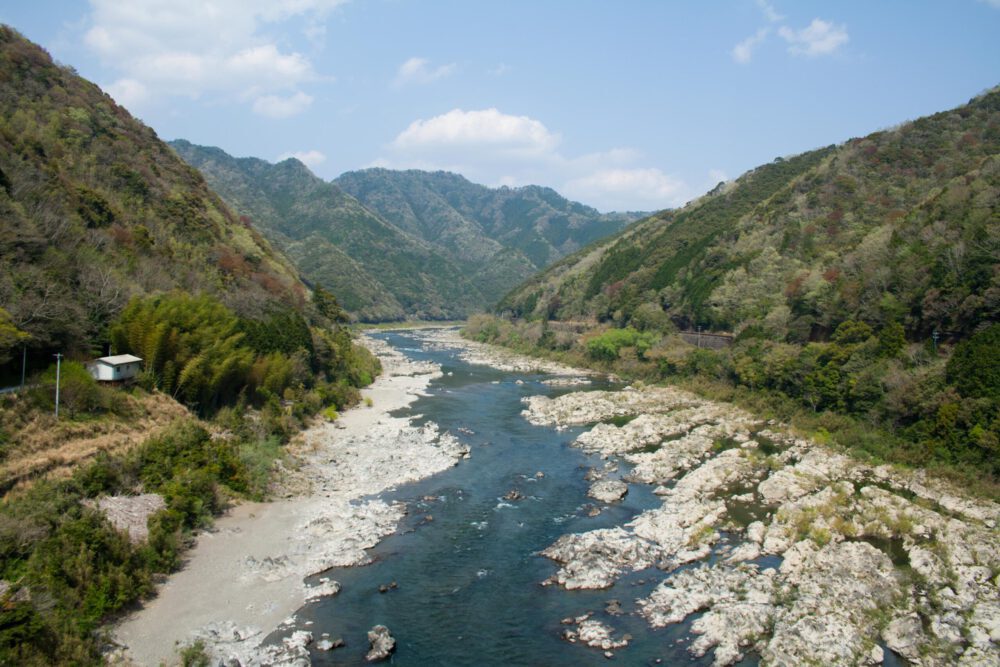 Also the day before this stage we had a rest day. So we took it easy and cycled a few kilometer along the coast to Akehamacho Takayama. There we bought some food and drinks in the local store for the next stage. We took a little walk through the village and went to the beach right in front of our camping ground. There we relaxed in the hot sun till the evening. Around the corner was a little hotel with a restaurant, so we had dinner there. Afterwards we went to bed early because the next stage was already waiting for us.

From Akehamacho Takayama through the Sudachi mountains

The start into our third tour was easy and refriegent, because we followed the coastline and some fresh sea breeze was always around us. Our goal was the Shimanto area, which is close to the south coast. So it was clear, at one point we had to start cycling into the inland. On the mountains at the coastline many Sudachi trees were planted. Sudachi is a japanese citrus fruit and Shikoku is especially famous for those. But there was no time for testing. The more we got into the inland, the more farms appeared along the road. During one of the breaks, some farmers were curious about the unusual appearence of two foreigners with bycicles in this area. The communication barrier did not allow deeper conversations, so we greeted each other friendly (several times 😉) and then we had to continue our tour.

After some minor hills we got to the Hiromi River. This river flows alongside the road through several forests. It was relaxing to just follow the river and not having a mountain in front of you. The Hiromi river flows into the Shimanto river which was our goal. Originally, we wanted to camp on the Mishima Camping Ground. But the camping ground was not well prepared. Maybe we were too early and the season for this camping ground had not begun. So we went on and ended up at “Shimanto Auto Camping Field ‘Welcome’“. We were the only people on the whole camping ground, but the staff was super nice and opened up the restrooms for us. So we really had luck to found this place near the Yusuhara river. The only other guest was a tiny frog directly at our water supply next to the tent. He was not shy and posed a bit for the camera. However, the tour was so exhausting that we didn’t do much more than having a shower and taking our evening meal. The next day we would have time to relax and explore the area.