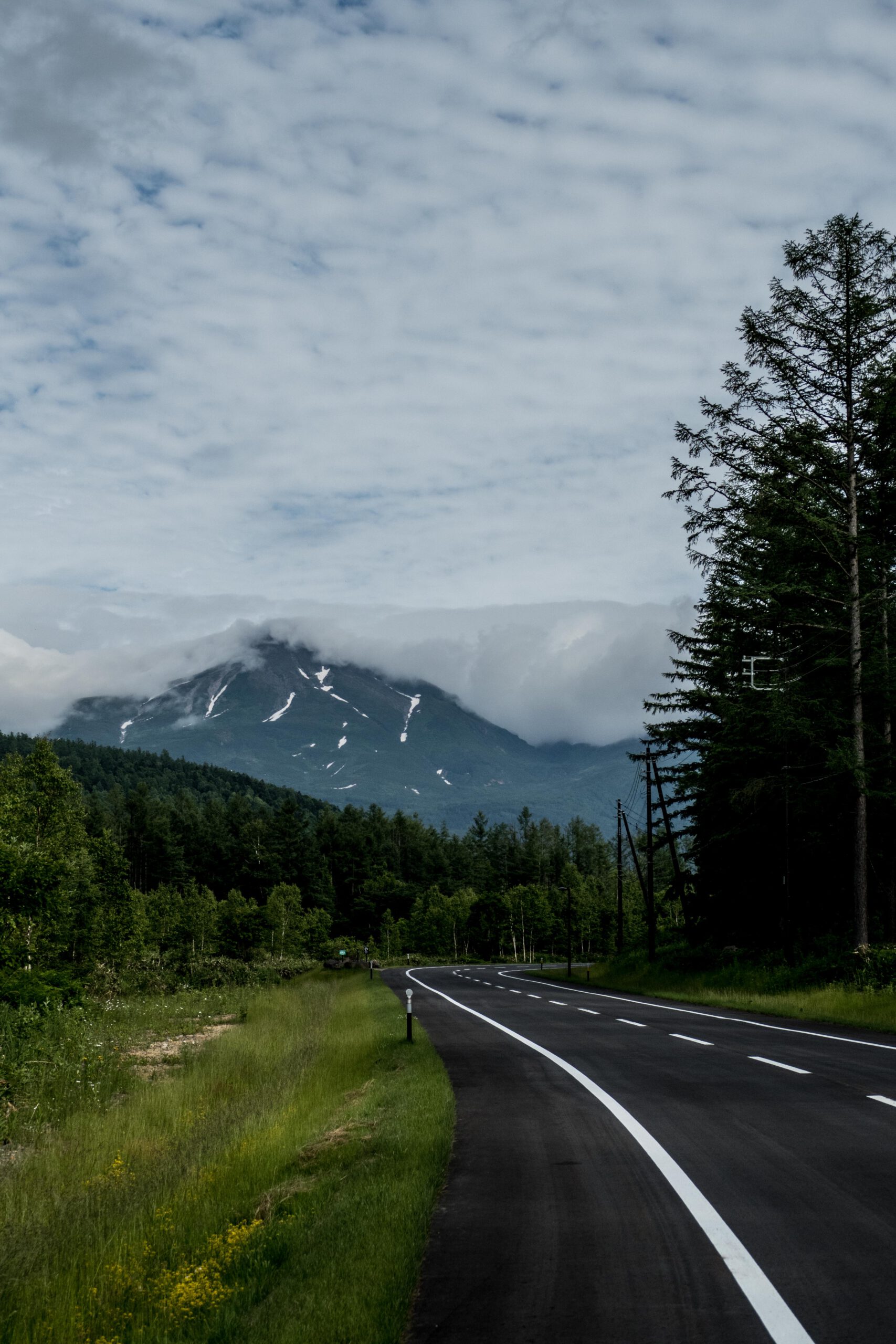 Beautiful view on the mountains on the way to the Blue pond.

The goal of the 3rd stage was Kamifurano but we had a rough start. Alex had still problems with his stomach, so we had to do a lot of breaks in the beginning. But then we passed a 7eleven and took the chance for a late breakfast. Afterwards we had a bit of climbing and cold conditions, so we were happy to have our warm clothes with us. After a long and fast down-hill we could already see far away some mountains of the Daisetsuzan National Park with snow on the top!

The region of Kamifurano is known for the beautiful coloured fields of lavender but instead we saw a lot of farms with water melons. Passing the fields it was almost flat and we had a lot of speed to arrive after just 60 km at the beautiful camping ground Kamifurano sunrise park auto camping next to Hinode park. After a fast and easy check-in we could build our base. Because of the rainy condition it was finally tarp time.

After this tour we needed a big size meal, so we found a beautiful place named Daiichi Syokudo. The owner was very friendly and seemed to be always glad to see some gaijins in her restaurant. So she took a picture of us to be on her twitter account. The place was totally comfy like a living room and the typical japanese noodle soup (ramen) was very good.

For the evening we had to prepare the dinner on our own. We made the mistake of going into the supermarkt quite hungry and bought a lot stuff including, of course some sushi for a typical japanese camping style dinner. Although it was from the supermarket, it was still good. But sadly shopping in japanese supermarkets also includes a lot of plastic.

Throughout the day the weater was not really stable and the tarp was totally worth it because after sundown it started to rain. So we still could enjoy our beer outside and without getting wet.

Next to the camping gound was a small hill. From there you had a beatiful view at Hinode Park and some mountain ranges. The weather was not good but still totally worth it.

One thing we wanted to see while being in the region was the Blue Pond in Biei. So on our rest day we cycled some tough kilometers up the surrounding mountains in the direction of Biei. We came along a beautiful dam and a very touristic spot near near the Blue Pond. Lots of tourist busses, a wild tumult of tourists taking photos and of course souvenir shops… We stopped there to have some drink and parked our bikes near some of the restaurants. The last kilometers could be done by walking (if you are not on a tourist bus 😉).

When we arrived – we were not the only ones, of course. But we managed to take a picture with no people on it (really complicated!). And we saw a cruel hunt between a rabbit and a fox. They were running through the people and probably the rabbit didn´t make it in the end 😟.

The way back was hard again – as we had to climb the mountain from the other side now and Alina was still a bit sick. We arrived at nearing sundown, took a hot shower and went to the Isakaya Fukutaros to order a lot of food to be prepared for the next day.