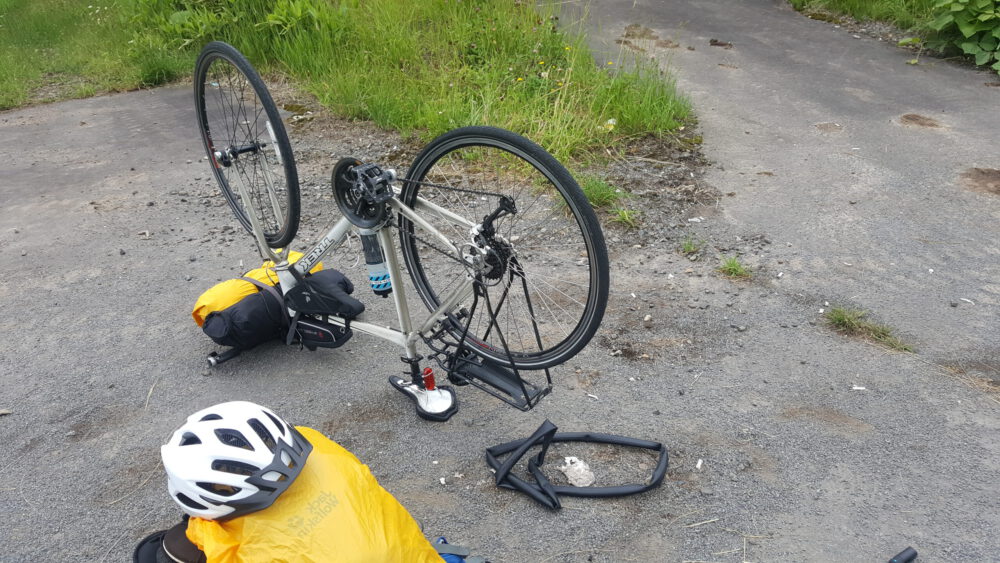 Tire replacement on the side of the road to Kamikawa. Accompanied by a lot of ant attacks.

At the beginnig of the 4th stage starting from Kamifurano we had to face two problems. First was the bad weather which we could deal with. Second was Alinas sickness. But the tour must go one and our destination was 80 km far away in Kamikawa. So we took it slowly. Luckily we did not have to climb much on this stage. Again we already got a nice view on some of the mountains of Daisetsuzan National Park.

After climbing smaller hills we passed by some beautiful flower fields right before Toma. In the city we took our chance at a Seicomart and had some lunch. Also we could warm up a bit and charge our mobile phones. In general convenience stores are always a good opportunity to charge your electronic equipment. Shortly after our break we had a bit bad luck and our first flat tire of the tour. We chose a place next to the road but this was already home to millions of ants, that weren´t very happy to have us there. But with the replacement stuff and some quick hand movements we were fast enough and could escape the ant attacks to continue our tour quickly.

Despite Alinas sickness and strong winds, we made it to the city of Kamikawa. For a better regeneration we decided to sleep in a small private accomodation lead by an old japanese couple (and some cats). The city of Kamikawa was really small and there were not so much options for a restautrant dinner. But as we could not cook in our accomodation we decided to have some ramen. This was not the best decision of our trip 😝 and did not bring the desired recovery for the next kilometers. So we went to bed early to get at least enough sleep for the next day.