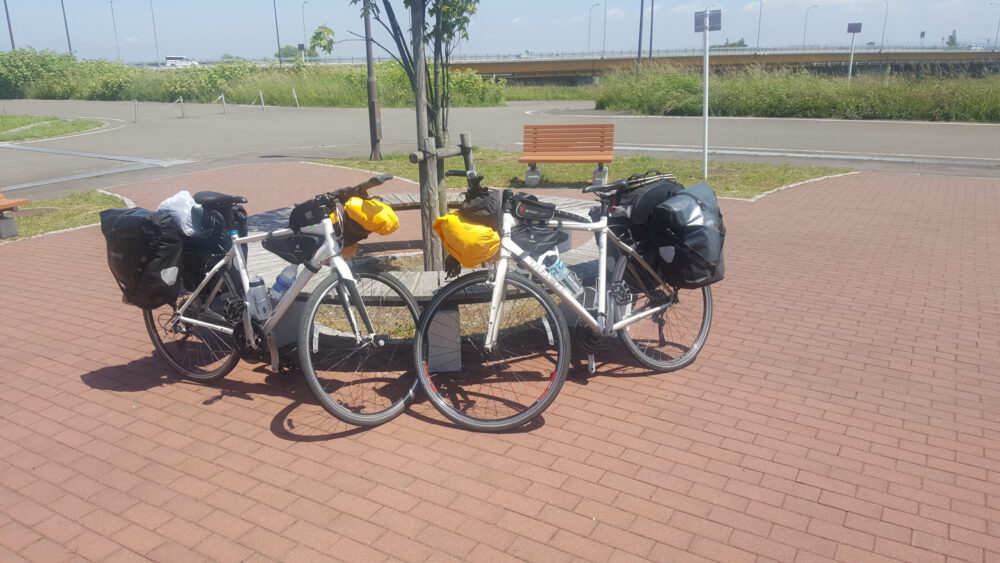 Bicycle resting next to a bench in front of the Kitahiroshima City Disaster Management Center.

We equipped our rental bicycles (Spark Cycling) at our hotel (Hotel Keihan Sapporo) and after that the “Tour de Hokkaido” could start early in the morning from Sapporo. The goal of our first day was around 100 km far. But first we had to cycle accross the entire city of Sapporo.

Our first stop was after two hours and only 23 km. Cycling through Sapporo was not so fast, but when we were outside of the city, we could enjoy the beautiful nature of Hokkaido. We stopped at the Kitahiroshima City Disaster Management Center next to the Chitose river and relaxed on some benches in the sun. Not many people around except a maintenance guy. But he was very friendly guiding us to the restrooms.

Almost starving and really thirsty, but then suddenly a 7eleven popped up at the street. Time for late lunch with Onigiri and a rice roll with fish. Also we had to refill our water because it really got hot during the day. Around 40 km to go. Had a little talk (mixture of japanese, english, and of course with hands and feet) in front of the shop to some resident, who was also an enthusiastic cyclist.

After our break we didn’t roll like we used to be. Tough mountains and strong winds forced us to the limit. So we took the chance at this beautiful camping ground next to a river. A very friendly old lady run a little combine store at the camping ground, so we could buy some food for dinner. In addition, we were almost the only ones who wanted to camp in this beautiful weather. So we had the whole space to choose from for the best spot.

There were restrooms but no showers at the camping ground. But in Japan this is not a problem. Let’s go to the Onsen. It was just a short ride. But the Jukai Onsen Hakua was in the middle of nowhere. So we were the only gaijins there.