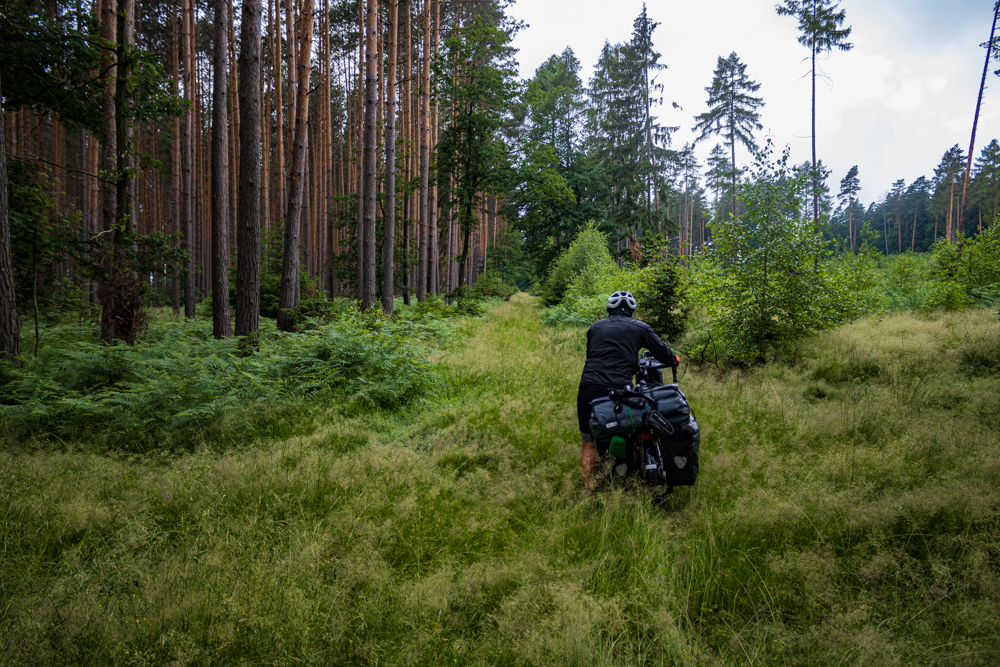 After a noisy and rainy night we woke up pretty early. We decided to start with breakfast because the rain stopped and we wanted to give the tent some time to dry (did not work as rain started again…haha). Afterwards we packed our bags, put on our cycle clothes, and dissembled the tent. When we filled our bottles at the exit of the camping ground it the rain got heavier. However, it was time to start our stage. We wanted to follow the R9 (Eurovelo 9) bicycle road, but our camping ground was some kilometers far from it. So we used the navigation to get to the next town which should be crossed by the R9. We started on a minor road, but it took not long and the navigation led us into the forest.

A horrible start in the Polish Woods

After a few kilometers the asphalted street ended and an unpaved road started which led us into the Polish woods. It was very stony so our bicycles shook a lot. After some time the road got a little better and we were protected by trees from the rain. When we came to a crossing the navigation showed in a direction where the road looked overgrown. So we decided just to stay on the current road and continued cycling. This was the first bad decision. Every 150 meter there were stone rain gutters in the ground (bounce….!). After a while the navigation showed again to a road which you almost couldn’t see because of high grass and a big fallen tree. But our current road would bring us further away from our goal. So we decided to turn on the abandoned path. This was the moment, when things went from bad to worse.

Lost in the Polish Woods

Cycling was impossible so we had to push the bikes. We hoped the bad path would be just a few hundred meters. In the end it was around three kilometers and one hour of pushing bicycles through high grass with a lot of deep puddles. Later most of the path was mud. We tried to cycle but it was that slippery every now and than. Alex fell of the bicycle two times but after an eternity we came back to an asphalted street. After this we changed the modes of the navigation from touring to road racing, so we just should use asphalted streets in the future. We continued cycling till we came to Dzierżoniów and made a rest at a cafe to regain some energy. The staff was very friendly and fluent in english so ordering was pretty easy.

After the break we still had to cycle a few kilometers to get back on the R9. So we still used the navigation system. During the next kilometers you could see some mountains on the horizon. So we were not surprised that we had to climb our first little mountain of the entire tour. There were some steep ramps and the highest point was at around 430m altitude. Not that much but after the rough start it was quite challenging. However, after this we had some nice downhill passages with nice views and we were finally back on the R9.

The next kilometers was easy riding. We had very good streets and came along some cute villages. Even the sun was shining from time to time. And also we had some beautiful views above mountains, farm land, forest and some small villages which fit into the landscape. We had our motivation back and also a little fun. By chance we came to a good restaurant where we rest for lunch. The tour was exhausting so we ate some really delicious fishes. We also had time for some cuddles with the restaurant cat. Minutes after we continued our tour heavy rain started. But till we found some shelter the rain was over.

In the Kamieniec Ząbkowicki we stopped for some photos of the beautiful castle “Park przypałacowy Kamieniec Ząbkowicki“. Also we realized that when we drunk from the bottles we filled up in the morning we felt a bit sick. Maybe the water was not good (there had been some polish stuff written about it…but we could not read it), so we stopped at the next “Sklep” to get some fresh water. The last kilometers were mostly asphalted and also the rain stopped. Our camping ground was next to two ponds. We were happy when we arrived. The last final low point was when Alex chair broke. But we could also fix this, and after a warm shower we had a little dinner next to some pretty loud frogs. Anyhow, we were just happy that this stage ended and we went to bed very tired.