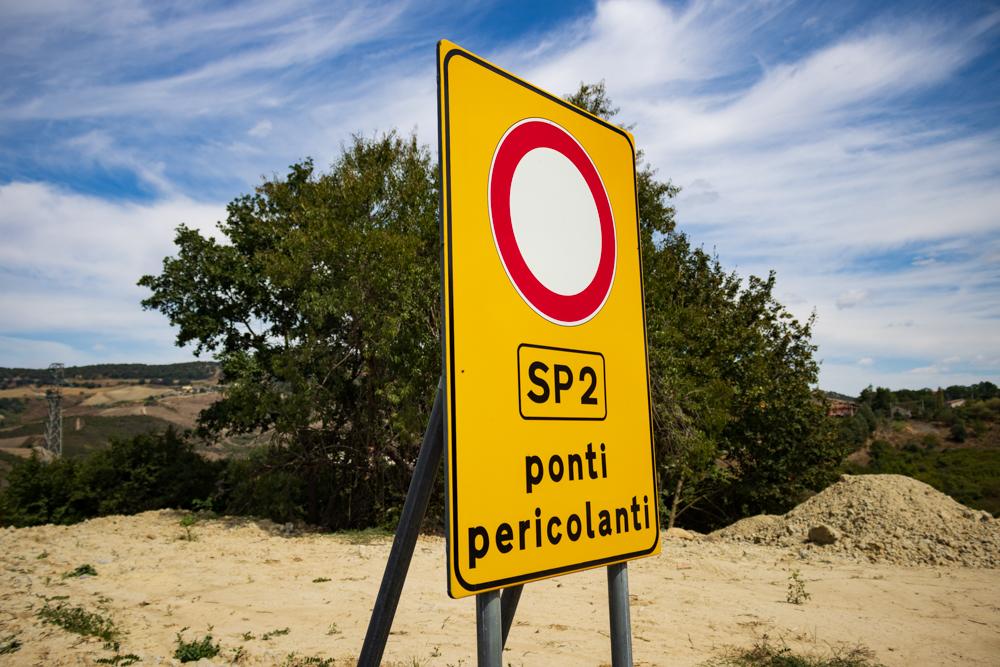 Next problem - unsafe bridges...should we take the road?

Our rest day in Rapolla started with breakfast at another apartment of our host. It was just a 15 minutes walk and a bit outside of the Rapolla on a hill. But the breakfast was really good with fresh figs from their own trees. When we returned to our room we relaxed for some time and did some stuff at our notebooks. In the evening we took a walk around the little town. It was located on a hilly ground, so there where ups and downs in the narrow streets of the old town. Also Rapolla itself was surrounded by mountains. In the morning and also during the walk we saw a lot of stray dogs, some of them with wounds, almost all with dirty fur, and behaving shy and fearful. A really sad picture 😞. After the walk we went to the supermarket and picked up a delicious Italian pizza on our way back. After dinner and watching some shows we went to bed.

The smell of sweaty climbing in the morning – leaving Rapolla

Before we started the stage we had breakfast at our accommodation. The host prepared the breakfast the day before because we started pretty early again. After carrying everything up the stairs (also the bikes) we prepared the bicycles at the street in front of the house and were good to go. We started with a pretty long climbing segment out of Rapolla. It was not too steep and we were on a minor street with not that much traffic so climbing was okay. However, we were a bit worried about the stray dogs which appeared on the street here and there. But most of them just were lying around and weren’t interested in us.

When we arrived the top of the climbing passage we came to the town Rionero in Vulture. There we had beautiful views on the surrounding mountains. After a really fast downhill segment we came to the small town Atella where we cycled through small and narrow streets. When we passed a small park we took the chance for a short break. We left Atella still on the downhill segment and little later our navigation showed us that we should turn into a closed road. The sign said that a landslide happened on the street. So we took a detour through a major street which started with, guess what? Yes, some climbing 🤪.

A few kilometers later we came back on our track, right behind the closed road sign from the other end of the street. On a small asphalted path in bad condition we followed our route. An excited dog from a farm followed us wildly barking, but we managed to escape. We crossed a river where some cattle grazed on the surrounding fields. Some of them were scared when they recognized our presence. Again a very steep ramp followed which was hard to cycle on this underground. When we came to a crossing we turned on the main street which was in better condition. But not for long when we again saw the bicycle path we turned back on it because it looked better than before.

Meanwhile, we were in a forest area and again some steep climbing was waiting for us. We needed some breaks but finally managed to get to the top. Shortly after that we arrived in the small town Ruvo del Monte, where we bought some supplies at the supermarket. Next to a church we built up our little table and had some lunch in a shadow place because the sun was already burning pretty hot. Some local people passed by and greeted friendly. We left the city on a downhill segment on a minor street.

Detour, the second, and a lot of climbing again

Suddenly, we were standing in front of a closed road sign again which said “unsafe bridges”🙄. We were not in the mood to cycle up the hill again so we tried our luck. The first bridge didn’t look that bad but when we came to second bridge, we saw that a part of the roadway was destroyed and there was a huge hole. But with bicycles we could cycle on the intact part of the road way and cross the bridge savely. A few kilometers later we came to a big crossing. The path we should take had also a warning about unsafe bridges. We didn’t want to overstrain our luck so we decided to cycle on the major street and planned to get back on our track some kilometers later.

Thus, again a very long and challenging climbing segment started. We had to make a rest every now and than because the sun was burning hot. On the plus side we were on around 700 to 900m altitude so some cool winds were blowing. And of course we often had beautiful views on mountain ranges and valleys. The progress we made was not fast, but somewhen we made it to the top. From there we had a lot of fun on a very fast downhill segment on a brand new street again with amazing views on the surrounding area.

For the next kilometers again climbing and downhill segments alternated and we came to the little village San’t Andrea di Conza. The whole village was decorated with colorful flags. Again we rested in a little park to regain some power and planned the rest of the stage. It was pretty tough so far, so we decided to book an apartment close to our location. The last five kilometers to the small town Conza della Campania was almost the easiest part of the whole stage. Check-in was fast, but we did not manage to get the kitchen working, so we decided to walk into the town to get some supplies and eat a pizza. To our surprise almost everything was closed. So with empty bags and empty stomach we went back and made some emergency rice (on our camping stove) for dinner. This was quite a tough and challenging stage, so we went to bed afterwards.