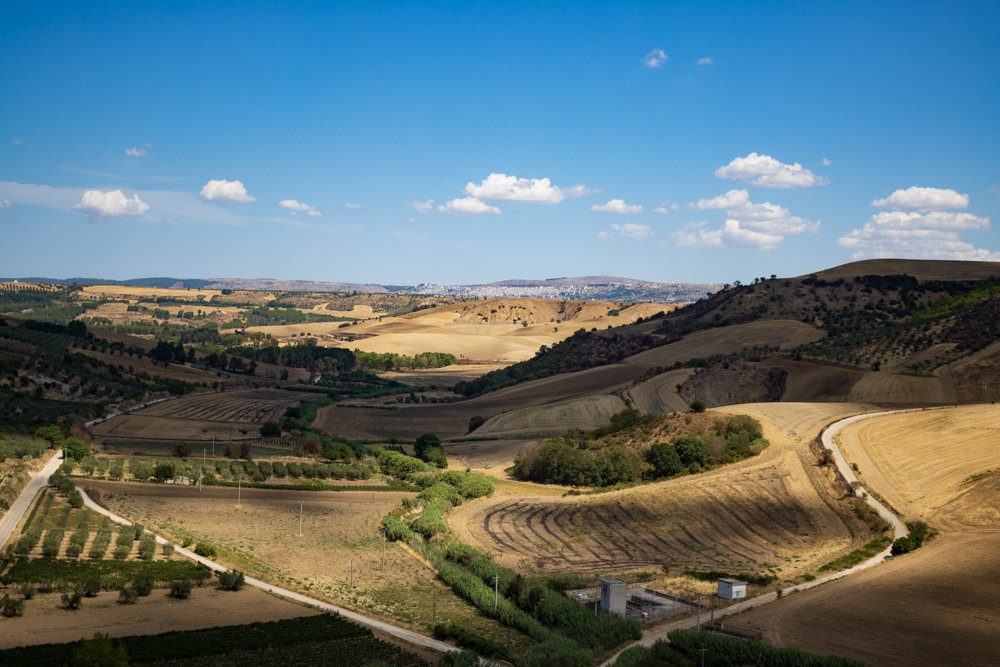 On the rest day we started with breakfast on our veranda. It was a nice morning in the area close to the nature reserve Alta Murgia and it was not too hot. Afterwards we cycled into the city center of Corato which was around 8km far. We bought vine and olive oil in Croatia which we were not allowed to send home from there, so we decided to send it within Italy to the family of an Italian friend. They will visit them soon and bring it to Germany. To send a package from the Italian post is quite a little adventure. With the help of many staff members, and after the purchase of bubble pack, Alina managed to send the package. With this success we went to the next café and drunk some coffee.

Before we cycled back to the apartment we bought some food in the next supermarket. We locked the bikes in front and some italian guy asked if we really locked them safely. Thus, we were a bit stressed in the supermarket and happy to find our bikes not stolen once we were back out. Also our apartment was kind of a high-security wing and we wondered if this is maybe needed here?

In the evening we took our bicycles and wanted to discover some ruins. After around 45 minutes we arrived there and were surprised to see some adolescent to make party there with loud music. So we just walked around for a some minutes and walked to the nearby aqueduct. There it was a bit more peaceful and quiet. On our way back we stopped here and there for some photos in this hilly and nice landscape. Back at our apartment Alina made some delicious dinner which we also ate at our veranda. On the next day we wanted to start early, so we went to bed after dinner.

As planned we woke up pretty early. After breakfast in the kitchen we got everything ready and could start our stage around 8. We followed a minor street to get back on the local bicycle path. There was not much traffic going on, the temperature was good, and the streets were in okay conditions. After some kilometers we entered the nature reserve “dell’ Alta Murgia”. The area consisted of bushes, some small forests here and there, and we saw a lot of drystack which limited the fields. Also from the distant we could see the “Castel del Monte” which we passed nearby.

When we turned into a small street it took not long until we came to a forest where we made a little break. As we got deeper into the nature reserve Alta Murgia the area got more and more remote. After some more kilometers our track led us onto a gravel road. It was quite tough to cycle there but we managed to get through this segment. Shortly after we had our first dog incident in Italy. It looked like an abandoned village which was maybe used as a dog shelter. Some of the dogs were not in a cage and were running around near the street. But in the end they just barked and did not chase us.

A few more kilometers and we cycled around the summit of Monte Guardianello. We saw a lot of burned areas, black olive trees, ashes, and of course burned waste. In this area we had to do a lot of climbing but then a fast downhill segment followed and we left the area of the nature reserve Alta Murgia. We took the chance for a photo stop when we had a beautiful view on the city of Minervino Murge. But before we entered the city we needed to do some climbing again and made a rest when we came to a little piazza in the city with some shadow. Time for a short break. When we left the city we came to a water station where you could refill water bottles for very low prices, so we refilled some of our bottles.

We were still on a downhill segment when we cycled on lone streets. Here and there were some big puddles and in one of them Alina took the wrong path and breaded her wheels and some other parts in mud. It was quite nasty, so we tried to clean at least something and then continued our stage. Back on a minor street our path led us to the small town of Montemilone. But before that we had to climb some steep ramps because the town was located on a hill. One road was so steep that cycling with our bags was impossible. So we had to push the bicycles which was also very though. Within the city we ate a lunch out of our bags in a quite peaceful small park. There was also some water source and Alina did a short bike wash, which was highly needed.

When we cycled further there was a lot of up and down. Despite the streets were asphalted it was quite challenging. In this area we saw more often the results of the forest fires which happend a few weeks ago. A lot of places were just black from the ashes and the trees where burned on one site and still had green leaves on the other side. Also this area consists mostly of farmland and there weren’t any dense forests just isolated trees.

How about some climbing in the end?

Before we came to the city of Venosa we had our second dog encounter but it was like the last time. There was a nearby dog shelter and some dogs were not in cages so they run on the streets (or also just rested in the middle of the street). But also here nothing happened and when we entered the city we made a break at a bus stop. We checked our options for the night and decided to cycle to Rapolla and booked a Bed & Breakfast there. Our path led us through the narrow and wonderful streets of Venosa which we really enjoyed.

The last part of the stage led us through a hilly area. Steep ramps and downhill segments alternated. But also we had wonderful views over the surrounding mountains and it was a nice area. The last four kilometers were pretty hard. Rapolla is quite a hilly city and navigation in this small streets was really difficult and annyoing. But in the end we arrived at our accommodation. The host was very friendly and showed us the place. After a shower we went to the next open pizzeria and got us some delicious pizza. After eating we were so tired from this exhausting stage that we almost immediately fall asleep.