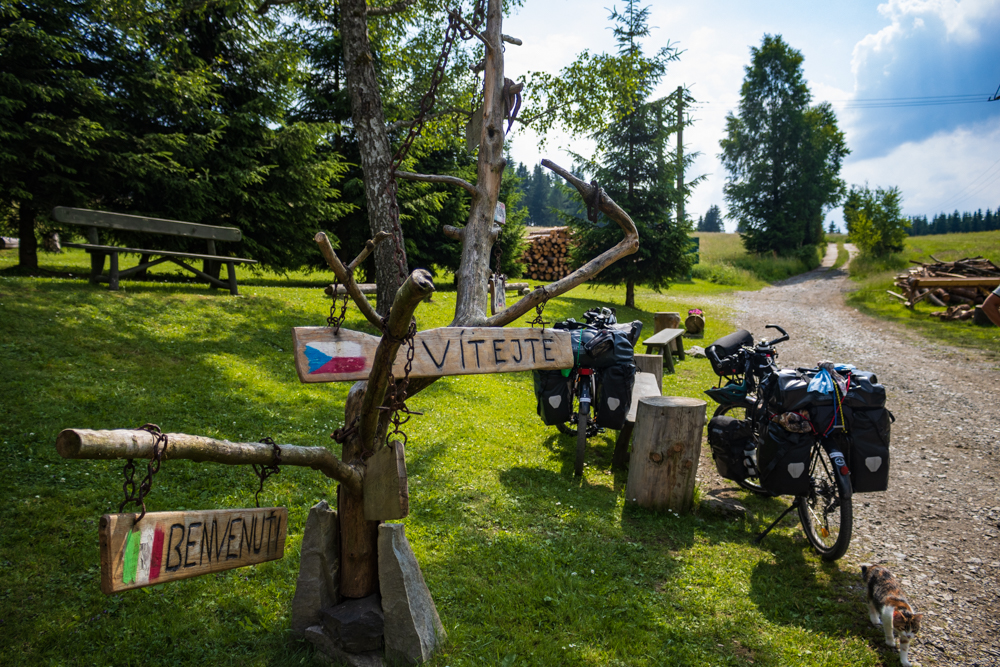 Welcome in different languages - nice rest place at the hotel.

The stage we did a day before was hard and costed a lot of energy. Also due to the two flat tires itH took a lot of time. So we decided to relax on our rest day and not to do that much. After breakfast we did some stuff at our notebooks. Later we had a Pierogis and Potatoe Pancakes as lunch and the rest of the day we just lay next to the pool and enjoyed the cool water. A little creek was floating through the camping ground, the facilities were in top condition and although there were some people it was very quiet. So it was perfect for us to relax and regain some energy. After a dinner with fries and a tomato soup we went to bed quite early because on the next day the Czech Republic was waiting for us and we thought it might be a bit hilly.

When we woke up for our next stage we weren’t that early. But putting our things together, having breakfast and dissembling the tent was fast. When we left the camping ground the sun was shining and the temperature was quite pleasant. We had to cycle back to Głuchołazy because this was the city were we left the R9 bicycle road. Therefore we knew we had to cycle through a hilly area, but it was not that hard as we expected. In the beautiful town Głuchołazy we went to a cafe and had a little second breakfast. Also we bought some supplies because we wanted to spend our last Złoty. When we continued our stage it was very cloudy.

The Czech border was not far. There were some climbing segments but not too steep. We had to cycle on minor roads, but there was not much traffic going on. And of course when we reached the border and saw the signs of the Czech Republic we had to stop and make a photo. Behind the border immediately a rest place for the Eurovelo 9 appeared and also a map with explanation. We followed a small bicycle path. It was easy to cycle and there were signs for the Eurovelo 9 everywhere (like another world…).

For the next kilometers we cycled along a small river surrounded by mountains. Also it started to rain and it got stronger and stronger (was Poland crying because we left?🤔). So we took a little pause when we came to a bridge that protected us from the rain. The rain did not last long so we continued our tour. We came across a lot of small cozy villages and always had some stunning views on the mountains. The sun was shining again and cycling was quite fun when we came to Jeseník. So guess what happened next? Of course Alex got a flat tire 😩. By now it was just routine to fix the flat tire. This time we also could find a piece of glass that was the cause.

Till now it was a hilly but not too tough stage. But after Jeseník an unexpected climbing passage begun (we had no real imagination of the topography of the Czech Republic). We were on a major road again but there was not that much traffic going on. But of course some heavy trucks passed us by. And these steep ramps felt endless and in addition, we were under attack by flies 🐮🦟, so it was quite stressful. The heat forced us to do some stops from time to time. But after a lot of sweat we reached the top of this stage with 770m. The first real climbing action after over 2000km through Sweden and Poland. We were relieved when we got to the summit.

The reward of this climbing were stunning views. And also a very fast downhill. In this area there we a lot of ski lifts, but of course they were out of order because in June there is no snow. However, this let us realizing how high we climbed. We cycled on asphalted roads for some kilometers but after a while our path led us on unpaved roads. And we had to climb again. But this time on a very stony and steep road. This was even more challenging than the climbing before. But good for us it was not too long. When we came to a beautiful little hotel in the middle of nowhere, we needed a rest. Bad luck for us that the bar in the hotel was closed. But a cat kept us company.

Enjoying the views and finding the first accomodation in Czech Republic

When we continued our stage we had some breathtaking views of the mountain range in this area. Crazy how the landscape changed after entering the Czech Republic. You could made a stop every few meters and just enjoy the view for hours. But of course we could not stop there forever so we cycled further. After a long and fast downhill passage we came to the city Hanušovice. We got an SMS warning that there was a thunder storm approaching that night. So we decided to go to a hotel for the next two nights. Also there were no real alternatives as the next campsite was some kilometers away (maybe also height meters…). After this tough tour we needed some time to regain energy. So we booked the only available room in the city (Penzion a relaxační centrum Andělka). It was expensive but also almost luxurious. The check-in was a bit crazy with noone being present, then an excited czech speaking woman, and a hurry without understanding a word 😵.

In the evening we watched the German football team loosing against England and also our Swedish friends lost their game. But our cozy apartment, some beer and dinner consoled us over it. When the thunderstorm approached and there was one lightning after the other, a huge noise, and you could almost feel the storm in the apartment – we knew it was worth it to stay here.