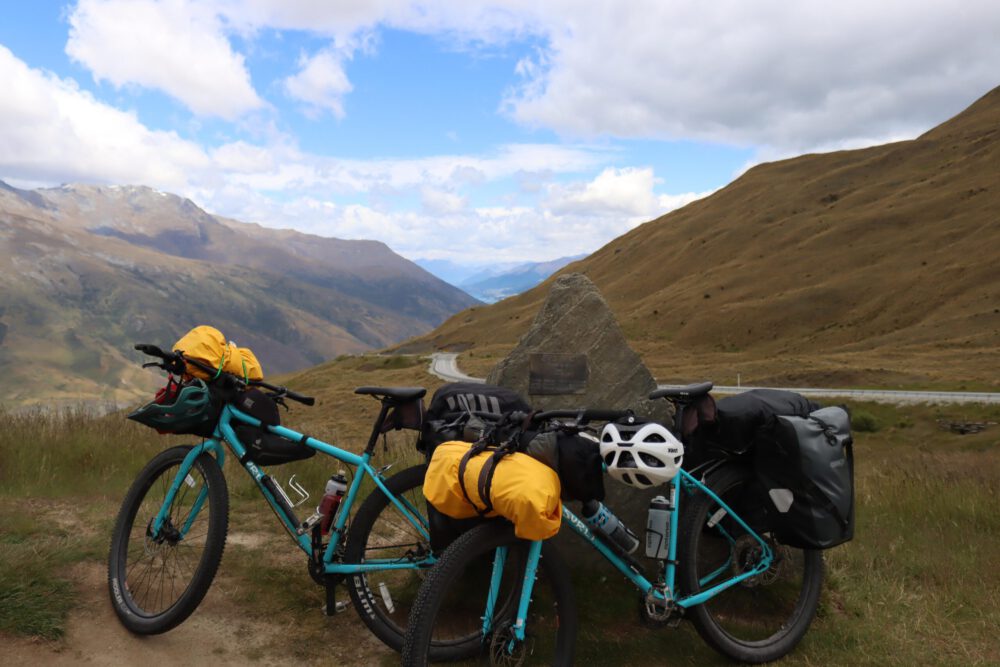 Our bikes at the top of Crown Range. Also they needed a break.

On our rest day in Wanaka we just relaxed at the beach, ate in another japanese restaurant and went to bed early. But during the night it got really stormy so that we had to leave the tent once in a while to fix the tarp again. In the morning it was cloudy and we already knew what would come again: the rain. So not the best conditions to make it over the crown range. We already heard about the highest asphalt street on the island and were a bit afraid of the tour.

Stormy, grey, and rainy up to Crown Range

The first kilometers went quite fast and the weather was just windy and cold. In the beginning of the first height meters in the direction of crown range we had a second breakfast. We got nice cappuccino with almond milk and some bakery stuff at the Cardona Valley General Store. When we left the shop light rain started and the clouds hung low and sad over the mountains. But we were motivated to tackle this huge range!

Between bare fields with some flowers here and there we made up our way slowly. More and more often Alex bike had problems with the gears – really not a good spot to stand on the road again and again. Annoyed drivers passed by really fast and there was – again – no shoulder on the street. So we tried to forget our fear, pedaled like hell and stucked as far left as we could.

By the view from the top we forgot all the anger and fright from before. We could see so far, it almost felt like the top of the world. After a short photo stop and some energy refill we got cold up there and sattled up again.

Breathtaking descent from Crown Range down to Queenstown trails

It was an almost endless downhill part from Crown Range and we were really freezing but it was totally worth it. In nice serpantines we made our way down in the direction of Queentstown. When we got more and more close to the city we searched for the signs of the Queenstown trails (Twin Rivers and Lake Wakatipu ride). These were really well prepared tracks around the city and Lake Wakatipu. We were glad to see the sun again and it was acutally a bit warm and we had to prevent our skin from sun burn.

Queenstown and the bike repair

Already on the top of Crown Range it was clear that Alex bike needed some inspection in the bike shop. It seemed as if the cassette was bent. In addition the bike had a flat tire somewhere after the down-hill and it was really tricky to get the rear wheel on again. So we corresponded with Natural High and got the opportunity to bring the bike in a shop in Queenstown during our restday.

After checking in at the Aspen Lodge Backpackers in a tiny but really comfortable room we checked out the city. Maybe we had a little sushi addiction at that time as we chose fish for dinner once again. Finally we finished the day with a huge icecream while watching the sundown at the lake.