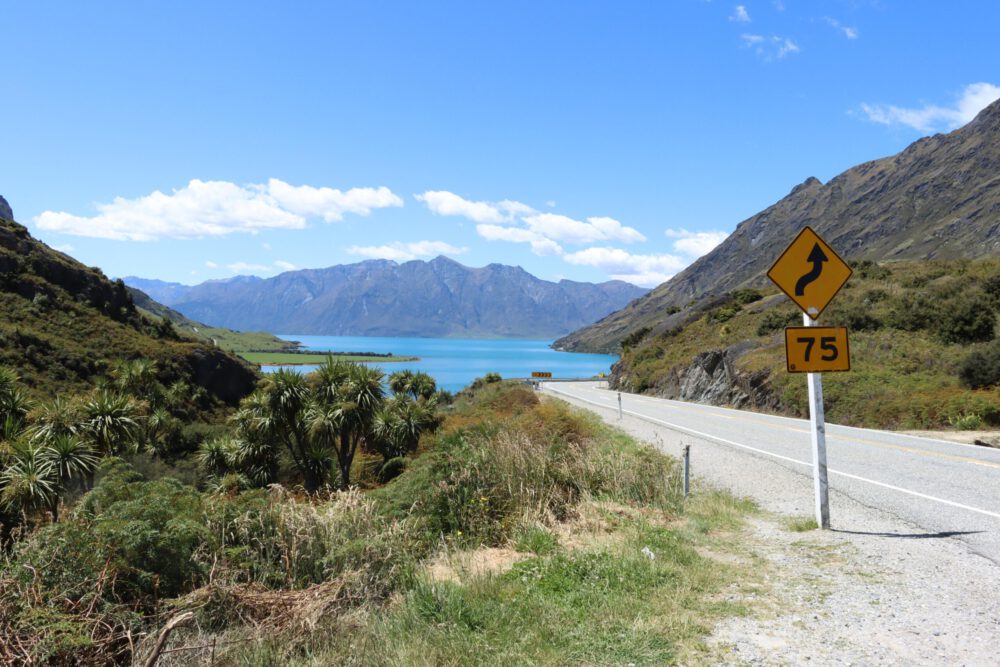 The neck - between Lake Wanaka and Lake Hawea. Also a tough climb.

Waking up in Makarora with the sun we were happy that the summer was not already gone again. We started early and cycled further on the Highway 6 in the direction of Wanaka. The street went along the beautiful Lake Wanaka. And after a tough climbing we could enjoy a stunning view over Lake Hawea. The landscape was incredible but the traffic on the other side really terrible. So the mood again was a bit depressed. The fields along the road were typical New Zealand: a lot of sheeps out there!

Around the lakes to Wanaka

We had a few stops around the lakes mostly to take pictures of the impressive lakes and the colourful nature around us. For our lunch break we stopped in the small city Hawea. There was a nice park, where we had a little picknick. An older woman came to us, asking for hints regarding our bike bags. She had planned to cycle all the way from the north to the south of the island next year. Crazy and impressive – so we were happy to share some insights 😉.

From Hawea to Wanaka we followed the Hawea river track, which was really nice and flowy. We had a lot of fun by the little ups and downs of the path. Also the surrounding was versatile and stunning. At some point we got a little lost but met a nice New Zealand couple riding their MTBs. They were happy to help us finding the way to Wanaka. And there was one thing we all aligned on: New Zealand is probably the most dangerous spot to do bike travelling in regards of the traffic 😉.

Last place at the campsite

When we finally arrived in Wanaka it was late afternoon, we were really lucky to get one of the last campsite spots at the Wanaka Lakeview Holiday Park. This place was really nice, excellent facilities, a public warm room with kitchen and places to sit, charge the phone etc. After building up the tent and tarp (be prepared for rain!) we checked out the city and found a really nice sushi shop. As it was already closing time everything was on sale and we got a big menu for just a few dollars. So the reward of todays tour was a nice dinner in the sun at Lake Wanaka ☀️.