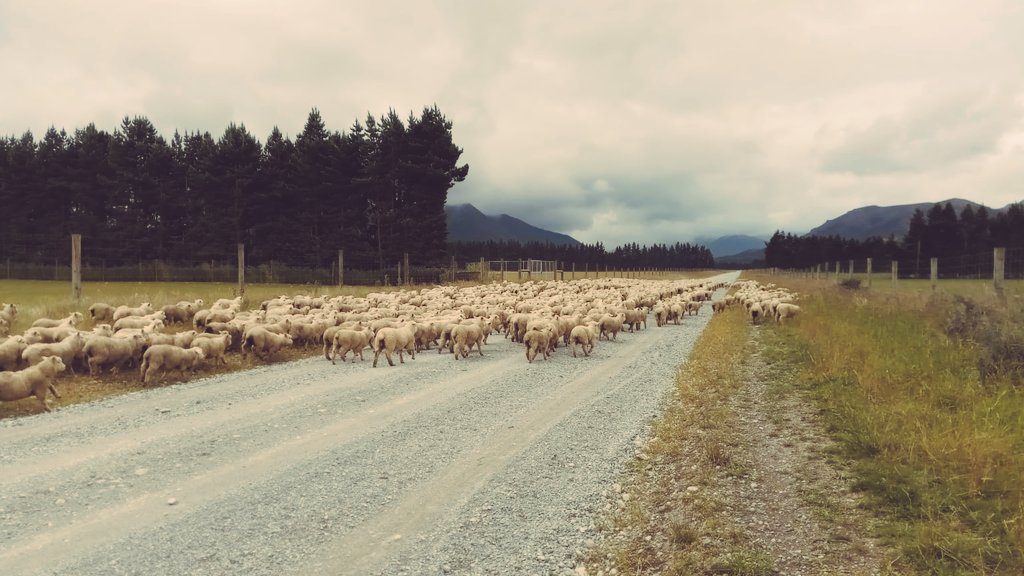 On our relax day in Queenstown we did not rush around. After sleeping long and having a nice breakfast in the public kitchen of our accomodation we brought Alex bike to the guys of Bikeaholic. Luckily, they managed to do the repair during the day. So we could go on with our tour on time.

For lunch (which surprise!) we had sushi again 😉. As the weather forecast for the day was really bad with rain and wind we decided to challenge our luck in the SkyCity Queenstown Casino. It was fun betting on some greyhound races and playing roulette – but the big win stayed out. Later on the rain stopped and we got the chance to take the Skyline Queenstown and had a fantastic view over the surrounding mountains, the unusual snow (in summer!) on their top and Lake Wakatipu.

Taking the ferry from Queenstown to Mt. Nicholas

We booked two tickets for the Southern Discovery “Spirit of Queenstown” to get over to Mt. Nicholas. There we could get on to the “Around the mountains trail” – one of the 22 great rides. The cruise over Lake Wakatipu was impressive and also entertaining with some information about the history and nature, presented by our captain. The ferry departed around 11 in Queenstown, so it was already lunch time when we started our tour in Mount Nicholas.

Around the mountains trail – Queenstown

The first kilometers on the trail went quite well and we saw some colourful birds, huge mountains and enjoyed the silence of this spot on earth. But we had annoying head wind and really had to fight against it. After a tough climb to Von Hill we needed some break up there. So we took the chance to do some photos and eat some energy bars. We knew there would be a lot more to cycle that day…

After several little rivers to cross with our bikes, many smaller and bigger hills to tackle and really long and lonely kilometers through the backland of Queenstown we suddenly ran into a group of New Zealand sheeps. There was a little sheep panic because of the crazy german cyclists 😉.

After some rain we could cycle our last (exhausting) kilometers during the sundown into the direction of Manapouri. Just before we arrived the city we found a nice campsite (Manapouri Motorhome and Caravan Park) to check in. It was almost 8 o´clock and we had cycled over 100 km. After a quick pasta dinner we fell asleep really fast.