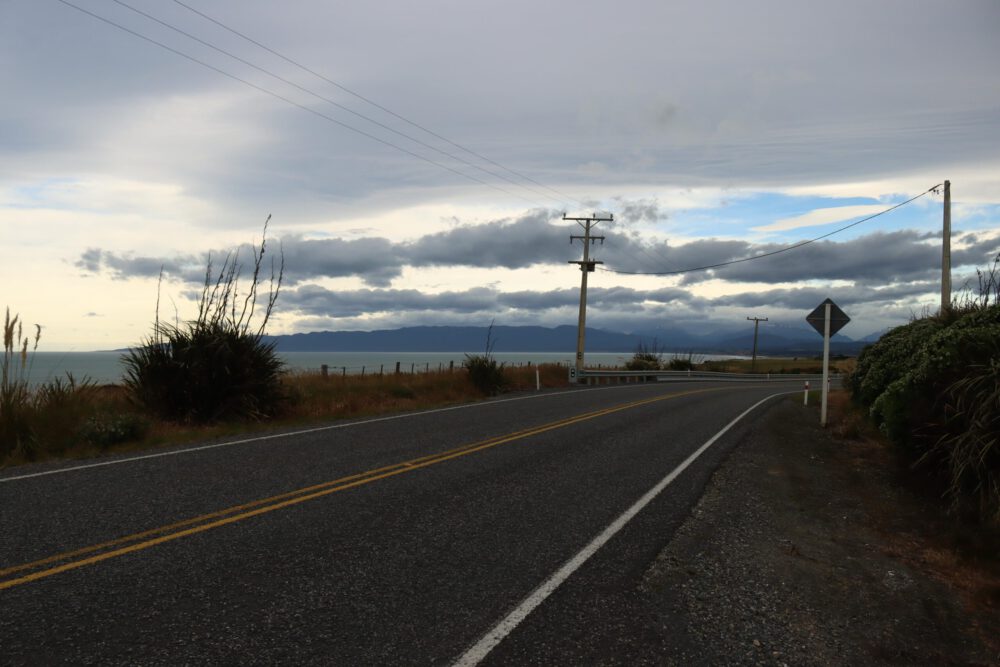 Southern Scenic road at the coast to Invercargill.

The night in Tuatapere was really stormy and in the morning we had to search some of the tent pegs in the grass. Luckily, the tarp was not blown away. The first kilometers in the direction of the southern coast went smoothly. It was again the Southern scenic road. But as we got closer to the ocean the wind got stronger and it was exhausting to hold our speed. It would be 90 km to Invercargill, so we knew we should not dawdle. However, after half of the way in Riverton we stopped for some lunch and to escape the storm. We had cappuccino and something from the lunch offer at the Aparima Restaurant and Bar.

Against head wind to Invercargill

After the restaurant stop our energy was refilled a bit and we tried to find our way through Riverton. This was not as easy as it sounds. On the map the Te Araroa Trail was listed to go along the beach. Thus, we searched for the way to get there in the middle of the terrible storm (it was even hard to hold the bike at all). But all we got were some scratches from climbing around the undergrowth. So we got back on the main road and pedaled further against the awful head wind. As we got closer to Invercargill the traffic got heavier around us and the sky went dark grey. We were afraid of a real storm approaching and really hurried the last kilometers. Exhausted and relieved we arrived at our accomodation (Heritage Court Motel) in Invercargill around late afternoon.

After the check-in and a quick shower we went into the town and celebrated the last stage of our tour with some delicious japanese style meal (Koji). We were so hungry, that we ordered really a lot of food so the owner asked us if we would starve until he will bring the food 😁. But we survived and it was extraordinary good. For the next three days we were steady customers.

The next day we checked out Invercargill and went to the Queens Park to watch the nice gardens, the animal park with a lot of birds (aviary), and just relax a bit in the sun.

The day after that we had a last bike trip to get to the ferry to Stewart Island. It were “only” 30 kilometers to Bluff but it was a narrow B-route with lots of big trucks and fast cars. Not really nice to drive but there were not so much options to get there on time. We checked in for the ferry (actually a small boat) and it was an awful trip over the rough ocean. Several people got sick around us, some of them puking and even one of them was collected by the ambulance when we arrived after this “bumby” trip.

But the island was totally worth it. We did a little walk, could see some birds, relaxed at the beach with a beer and observed the beautiful ocean. The trip back was smooth and even the bike part during nearing sundown was quite nice. After this last exciting kilometers with our bikes we returned them in Invercargill the next morning.