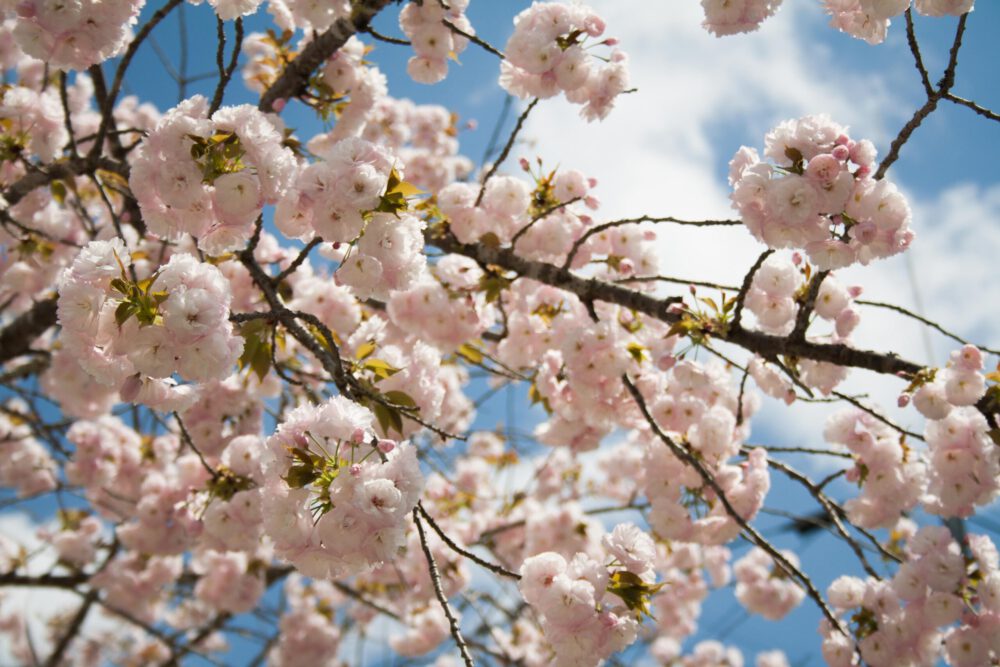 Cherry blossom in the Iya Valley.

During the night the Iya Valley showed us its frostily side. This was by far the coldest night of this vacation and even the extra blankets from the staff at the campsite could not warm us up. But the good thing is even these nights end sometime and the sun will show up again. So after we warmed up a bit during breakfast it was time to explore the Iya Valley on our rest day. So we took a ride to a famous vine bridge. On our way we passed the “Statue of a Peeing Boy” and we had some really nice views over the Iya Valley. Around the vine bridge were a lot of stores, where you could buy souvenirs, but also drinks and food. Alina was a bit scared of the wooden construction but we both survived the little walk and relaxed afterwards next to the Iya Valley river with some beers.

On our way back to the camp we stopped at a small hotel which had an Onsen. We enjoyed the hot spring (much better than the cold shower at the camp😉) and felt that we gained a lot of energy for the tour on the next day.

From Iya Valley to Takamatsu

So as the night before it was freezing cold. But after we got our bicycles ready, the sun was up and warmed us. The first kilometers we had to cycle around some mountains of the Iya valley. But it didn’t took too long and we left the area of the Iya Valley. We stopped for a short lunch at a supermarket owned by an old woman. While we were sitting outside a monch went in for shopping and as he left the supermarket he gave us some lemonades as a gift. Good energy, that we needed for the next mountain, which was a bit serpentine-style. After that we headed further north to Takamatsu and a more urban area began. So there were a lot of towns which looked kind of the same and also the weather got more rainy and cold.

We navigated to a camping ground, but when we arrived there it was closed. So we decided to search for the next convenience store to check our options via the web. We decided to book a hotel because on the next day we wanted to take the ferry to Kōbe pretty early. When we arrived at the hotel we got aware that we did not read exactly the description of the accomodation. It turned out to be a love hotel. But it was by far the biggest room we had on the whole Japan trip😉. For dinner we went to one of the main shopping streets of Takamatsu and had some delicious dinner. Afterwards we went to our hotel, because we had to get up very early the next day.

This is not the exact path we took. We did not record this tour, so we tried to create the track file from our memory. Thus, this resulted in about 75 kilometers.