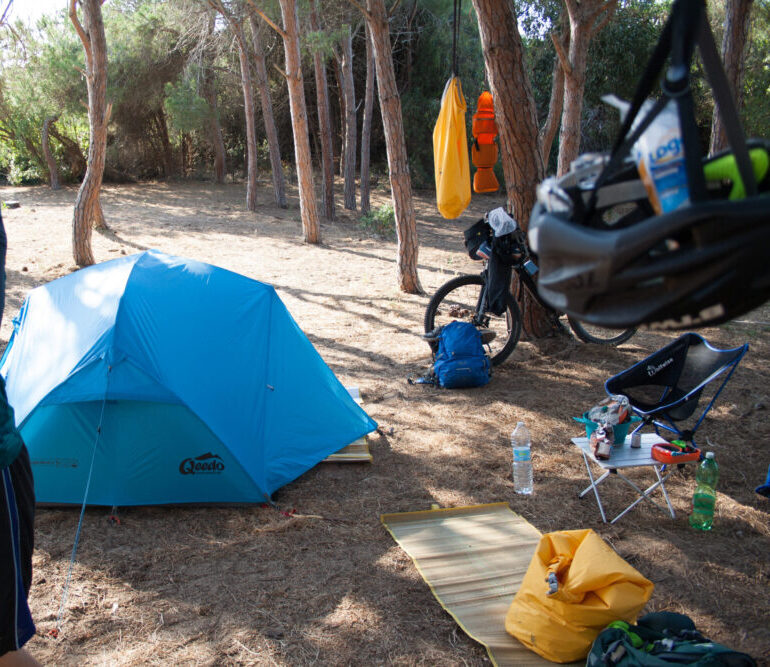 Our tent at the campsite Nurapolis in Sardinia.

We learned from the first tour and started quite early from Tresnuraghes to be make some kilometers before the heat of the midday would come. So the alarm clock ringed around 5:30 and we were on the bikes around 6 after a tiny breakfast and trying to make coffee with an italian espresso cooker (not really successfully…). Our target was Camping Nurapolis on the west coast of Sardinia.

However, the roads were quiet and we drove along beautiful sleepy villages while the sun was rising. There were some mountains in the beginning but we took our time and cycled slowely but steady. In the end we were on a long straigh road and it was almost only getting down to the city of Santa Caterina di Pittinuri. After cylcing a few more kilometers along the coast we already saw the sign for our campsite Nurapolis.

Lunch at Camping Nurapolis and visiting the beach around the corner

So our plan, to be early at the campsite and to avoid cycling in the heat, worked. Instead we could build up the tent and already have pasta lunch. Later on we went to the beach, which could be reached directly from the campsite by walking through the dunes. The ocean was a bit rough but we had fun in the water and slept a bit in the sun.

In the evening we watched the sun down over the ocean with some Ichnusa beer and enjoyed the sound of the waves. We went to bed early as we wanted to explore the surrounding the next day.

Little trip to Pineta is Arenas and problems with the gears

Pineta is Arenas is a little forest located directly next to the campsite. It has nice bike pathes and it was really fun to drive there. But we wanted to go a bit further into the southern direction and had problems to find a way to drive. After contact to some barking guard dogs, that definitly were not friends of cyclists, we decided to try a way along the beach. This ended in wounds at the legs due to carrying the bikes. Thus, it was an exhausting exploration trip and we were happy to get back to the campsite.

Lateron we went to the city in hope to find a shop with tools for bicylces as the gear change of Alinas bike was loosend on one site and we could not fix it our self. In a tiny shop we met a nice old man. We had a little language barrier but he tried to help us with a screw driver. However, it did not work well. So Alina had to change the gears carefully on the next tour(s).

This is not the exact path we took. We did not record this tour, so we tried to create the track file from our memory. Thus, this resulted in about 30 kilometers.