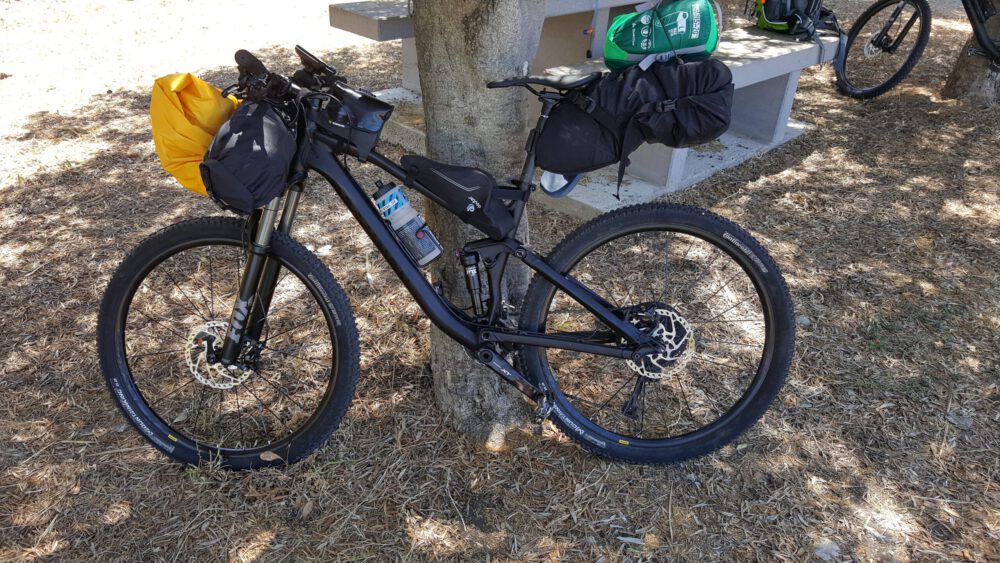 After a relaxed night in our accomodation in Magomadas with good air conditioning we were very sad that the place was booked for the next night. We really needed a day to prepare for the next long stage. So we searched for a nearby accomodation, found one in Tresnuraghes, and directly booked it via booking.com.

Before we checked out, our host in the Stella Maris BnB served us a wonderful italian breakfast with biscuits, marmelade, and fruits. We could have it in the huge garden. After packing our stuff together and making the bikes ready we did a last tour around the area to say goodbye to all the animals there.

Back on the road again the sun was already burning even so it was early in the day. We just had to go a few kilometers into the inland to the small village Tresnuraghes. But there were some tough climbs on the way. Half way in the shadow of some pine trees along the road we made a break. It was really nice to get out of the sun. We ate a bit and played cards.

Tresnuraghes and a day at the Spiaggia Di Porto Alabe

Somehow we survived the rest of the way and had an easy check-in at our next BnB Tredomus in Tresnuraghes. The plan for the day was just relaxing at the “nearby” beach Spiaggia Di Porto Alabe. So we took the bikes and just the backpacks with beach stuff and headed over to the coast. The first part was quite easy and in the end it was a long down-hill to the coast. So, we already knew what would wait for us later the day on our tour back.

The ocean was crystall clear and really nice. It was a beautiful spot, despite some tiny fishes wanting to get into closer contact with our feet and some sand flies at the beach. The latter ones were only annoying and luckily did not bite.

For lunch we sat in the shadow in front of Pizza @ Web and had some french fries and again played cards. After a short stop at the supermarket (to be sure we have to carry a lot of stuff up the mountain…) we started our way home. During sun down we made our hard way up the mountain to Tresnuraghes. Of course we went to bed quite early.

This is not the exact path we took. We did not record this tour, so we tried to create the track file from our memory. Thus, this resulted in about 5 kilometers.