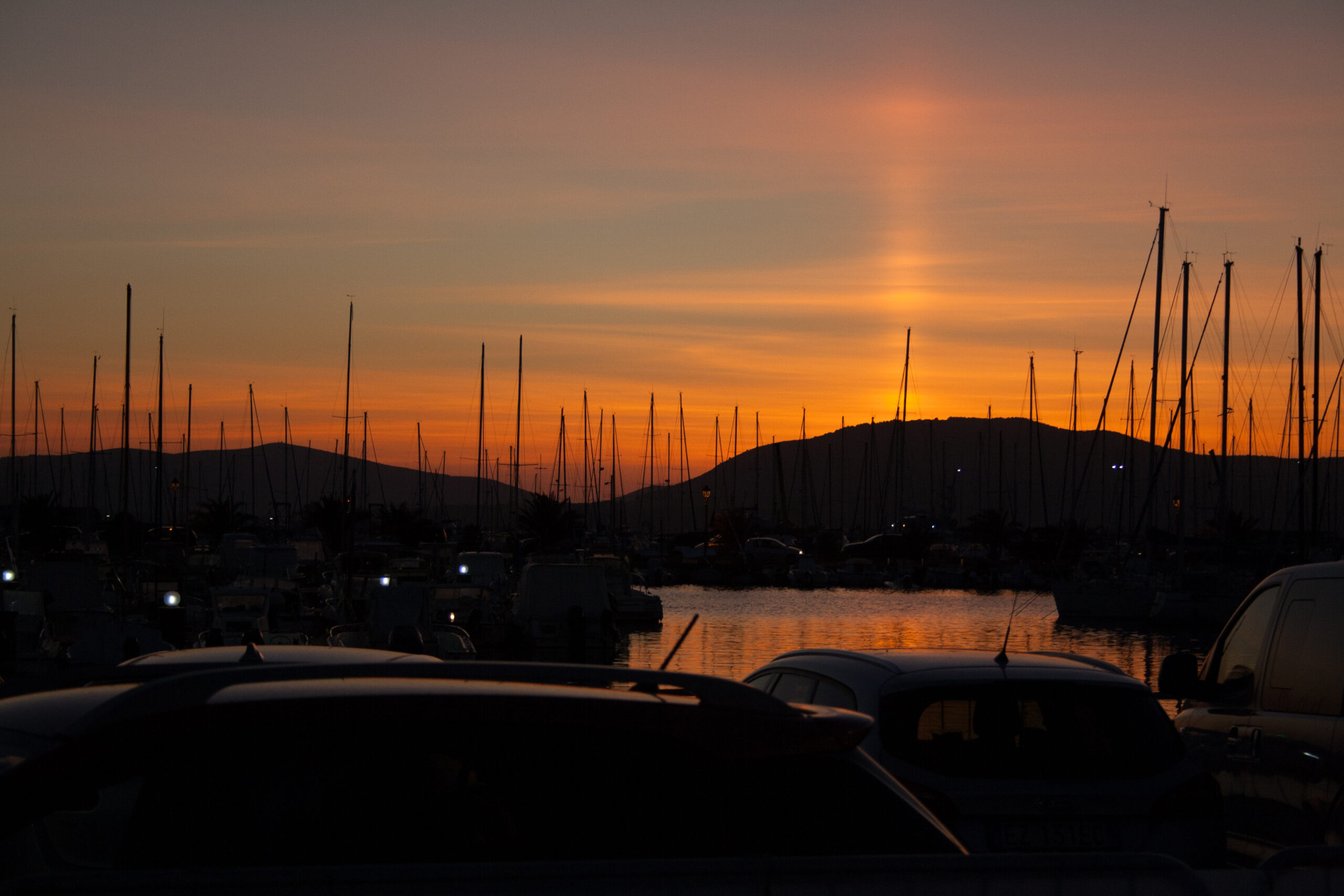 Alghero sundown at the harbor.

We arrived in Sardinia at the airport of Fertilia in the middle of the night. Building up a tent in the dark is really challenging 😉. Especially when you have just one packbag with all the stuff instead of a more or less organized suitcase. But we managed it and had a relaxed night at Camping Laguna Blu. To get used to the climate conditions, we rented two “basic” bikes around the corner the next day. We made a trip to the Grotto di Nettuno in the northern direction of Fertilia. Of course, our skin got the first sun burn and it was a really exhausting but still beautiful trip. Thus, the next day we cured our skin in the pine trees shadow at the beach of Maria Pia.

The following day was the day of our first stage. In the morning we went into the city of Alghero to collect our real bikes from Sardinia Cycling. We had booked two fully MTB´s and thought it would be a nice opportunity to test them as we only were used to Hardtail MTB´s. Once back at the campsite in Fertilia we tried to fit all our stuff to the bikes, which turned out to be really complicated. In the end, everything that did not fit to the bikes, landed on our back (backpack + things tied up, e.g. shoes 😉).

Endless road along the coast from Fertilia to Bosa

Already after the first few kilometers we realized that the idea with fully MTB´s was not the best. Due to the weight of our saddle packs in combination with the suspension, the packs once in a while (actually quite often…) touched the back wheel. Annoying and confusing sound + not good for the material of the packs 😉. However, on the even roads with good asphalt it did not happen all the time.

So we cycled in the middle of the noonday heat and recognized that this was the second bad idea of the day. We drunk a lot of our water reserves and desperately searched for shadow places to make breaks in between. Although the view over the ocean was stunning, we just wanted to arrive in Bosa. Suddenly, after a break at one of the numerous steep mountains, Alina got a flat tire. In the burning sun and with almost 40 degrees (at least the perceived temperature) we tried to change it. Due to cheap tools and the bad mood it was a really hard task. But we did not have any other option and after the repair a down-hill was waiting for us. In deed it was the way down to Bosa and we could see the target line already – we thought…

An adress with no house

In Bosa, an old town with lots of colourful houses we searched for the adress of our BnB Stella Maris. When we finally found it, there was only confusion. The property looked like a jungle and there was no house on it. Thus, we called the BnB and asked how we could get to the house. The actual adress turned out to be really far out of the city in Magomadas. But the lady on the telephone was very kind and offered to fetch us and the bikes. In the end two tours were needed for all the stuff. But as we sat on the accomodations balcony watching the sundown over the ocean all the stress was forgotten. Later that evening the host also drove us to a pizzeria. So we could fuel up our energy in italian style.

This is not the exact path we took. We did not record this tour, so we tried to create the track file from our memory. Thus, this resulted in about 55 kilometers.