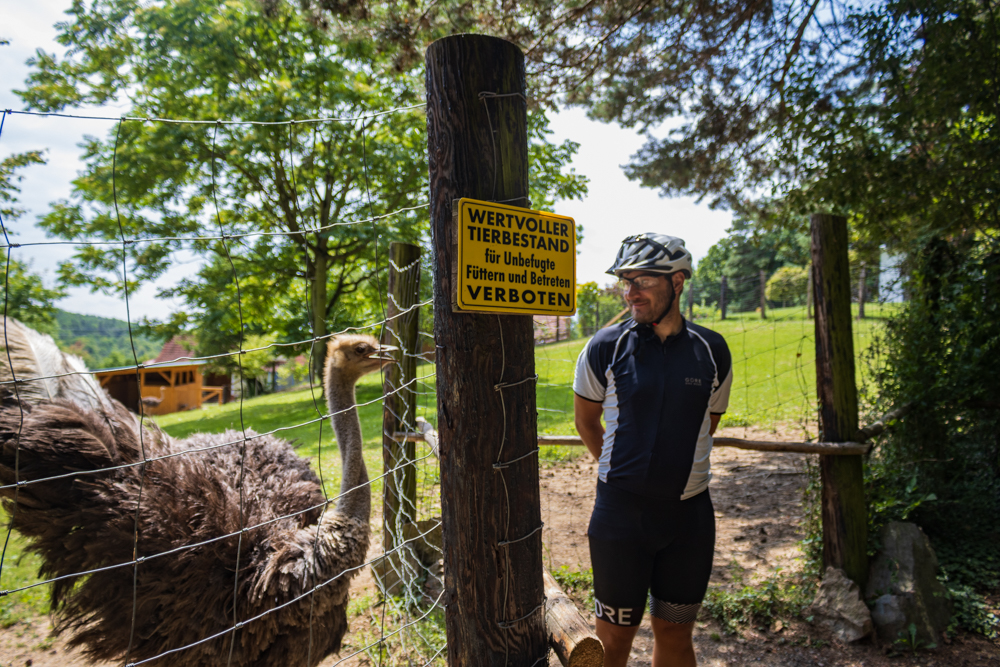 After the two tough stages in a row on the days before we used our apartment in Fürstenfeld just for relaxing and regained some energy. We only left to go to the supermarket and get some supplies for the stay and also for the next stage. Also we used the time to do some stuff at our notebooks. Before we started the stage, we went to an appointment for our Covid test. We were not exactly sure how far Maribor was, but we wanted to reach it in this stage. And for entering Slovenia we needed a Covid test (in theory) which is not older than 48 hours. So even when we arrived at Maribor one day later the test would be still valid. We wanted to follo further the EuroVelo 9 and the “Thermenradweg”, respectively.

Up and down in the mountains on the Thermenradweg

After a few easy to cycle kilometers from the start the first ramp was waiting for us (11%!). Like at the stages before it was very steep but not too long. On the top we stopped at a rest place where we could refill the first empty bottles. Here was also one of the hot spring resorts located, the reason why this bike path is called “Thermenradweg”. Not much later we could cycle a bit down hill. But the next climbing segment didn’t wait long. We came across an old little chapel which a men built after he was haunted by his dead wife who he tortured. The wild story was written on a sign next to the chapel. A little scared of the story we continued our stage in this area where up and down parts alternated. After a while we came across a sculpture park where we also made a break on a bench. The start of the stage was quite challenging, so we got the feeling we might not make it to Maribor.

When we continued our stage it did not take long when we came to another spot where we had to make a break. We found an ostrich farm along the way. One of the ostrichs was a bit in panic and run up and down the field, turning around like a ballerina. Two others were quite relaxed and interested in us and ready for the photo session. Afterwards we had a little more climbing to do but really nice views over mountains and valleys. Again a long downhill segment followed, where we could enjoy the view.

But as usual when it goes down, it will not take long till it went up. And this time it was a long segment in the heat of the sun without any shadow in sight. Almost on top of the ramp we came to the town St. Anna am Aigen where a supermarket was located. There was also a cafe where some cyclist took a break. One of them told us about a nice spot not far. Sounded like a nice spot for our lunch which we bought in the supermarket. But when we cycled through the city we found the beautiful view but no option to eat lunch.

So we cycled further till we came to a nice place where benchs and a table were located. Perfect spot for lunch. After a while the cyclist from before came across and we had a friendly chat. He was from Switzerland and on a three weeks cycle tour in Germany, Austria and Slovenia. We talked about our journeys and he gave us some good advice for cycling in Switzerland which we might cycle later on our tour. Also he told us that Maribor is quite far from where we were and recommended us that we might stay in Bad Radkersburg, especially for the hot springs. Because cycling the Thermenradweg without being actual in a hot spring would be a bit odd 🤔.

Enjoying the hot springs along the Thermenradweg

For the next kilometers we followed the Slovenian border. Every now and then we could see some old border houses which weren’t in use any more. The area was mostly flat and we met our friend from Switzerland again. We arrived in Bad Radkersberg quite early so we decided to go to the camping ground. So we built up the tent, got a shower and ate some self-made dinner. Then it was time to go to the nearby thermal spring. We followed the “Thermenradweg” since Wien and on this last stop in Austria it was finally time to enjoy the hot spring. There was a regular pool and two nice warm pools even with whirlpool. We enjoyed it and it was good for regaining energy. After a late ice-cream we went to bed in our tent.