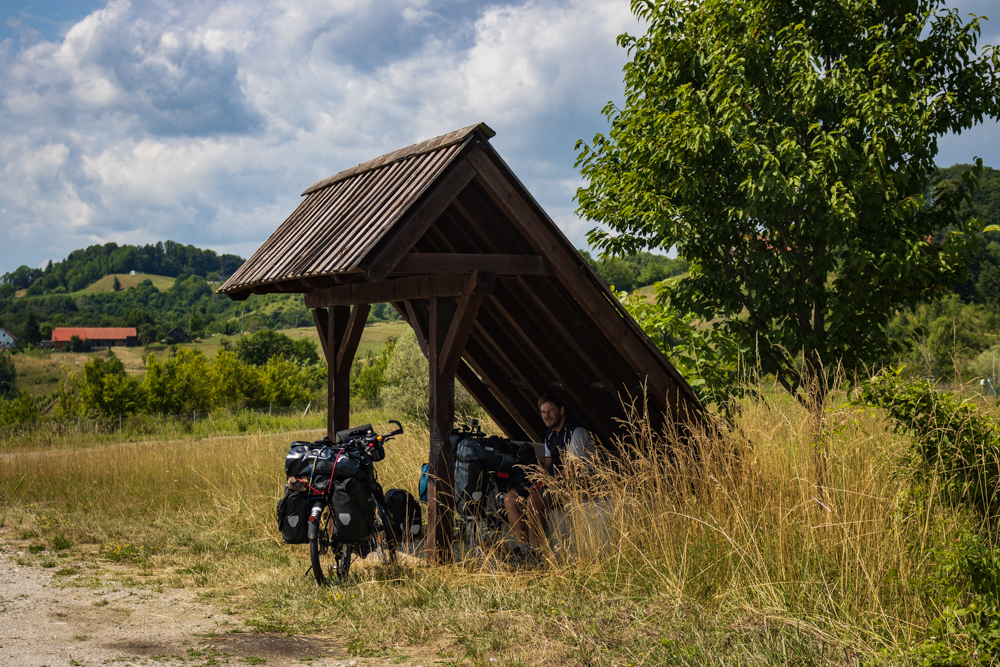 Exhausted after the tough climbing after the border.

After so many nights at hotels and apartments we did not sleep that well in our tent the night before this stage. But this is nothing a good breakfast can’t cure. So when we finished eating we got our things together and were ready to roll. The “Thermenradweg” came to end at Bad Radkersburg and so the local name of the Eurovelo 9 was now “Murradweg”. The river Mur is partly the natural border between Austria and Slovenia in that area. Cycling on this bicycle path was pretty easy, because everything was flat.

Following the river Mur to cross the border to Slovenia

Fist we cycled through some forest but not for long. We entered farmland again with a lot of corn fields. After a few more minutes it started to rain and almost every other cyclist searched for shelter. We were confused because it wasn’t heavy rain, and thought maybe they know more about the weather. But the rain did not last long and many cyclists we passed overtook us with their E-bikes. Again we entered a forest and came along some little lakes and ponds.

After we crossed the beautiful town Mureck we again came across a lot of farmland with endless seemingly corn. But you could also see some pumpkin fields from time to time. In the Steiermark you could often see signs at farms that advertised pumpkin seed oil. Looks like the Steiermark is famous for this. After some more towns we came to Spielfeld which was our last stop before the border. We ate some fish at a restaurant which had a huge aviary with parrots. A cat was quite interested in the birds but luckily they were protected by the cage.

Just a few kilometers more and we passed the Slovenian border. Only a small sign we almost missed marked the border. There were a lot of old border buildings which weren’t in use anymore. Now in Slovenia we followed a red bicycle sign with the number 1. There was nothing that indicated that this was part of the Eurovelo 9 but thanks to our navigation system we knew it. For the first kilometers there was a bicycle lane on the main road but after some time it disappeared. So we had to turn on the main road, but it didn’t took too long till we could turn on a minor street. A sign told us that it should be 16 km to Maribor. And then out of nowhere our first Slovenian climbing passage appeared. It was very steep and it took us a while till we were on the top but there was a rest spot waiting with shadow and a beautiful view.

After a nice downhill segment the most of our path was flat till we came to Maribor. There we had a little climbing passage but it wasn’t hard. We had to cross the whole city because our goal, a camping ground, was a bit outside. Cycling in Maribor was also not too hard because there were many bicycle paths and good road conditions.

At the camping ground we first built up the tent and then got a shower. Shortly after we finished the shower heavy rain with thunder started and also partly hail. Good for us that the camping ground had a big veranda which protected us. And the tent is now official hail approved 🥳. Afterwards we went to the supermarket and had dinner, again under the veranda. Full and also a bit tired we went to bed in our still really wet tent (of course only from the outside).