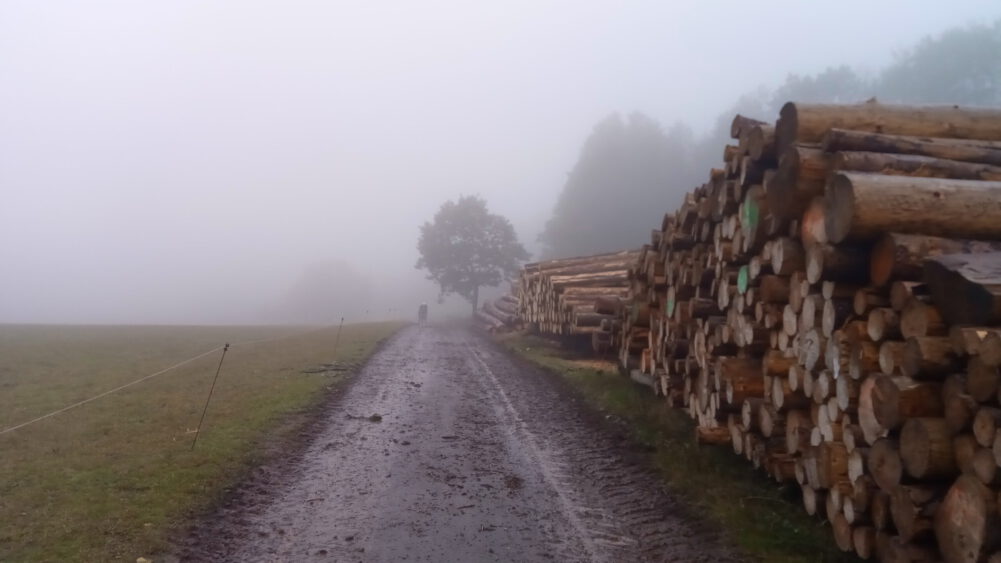 Alex left behind in the fog of autumnn in the Odenwald

It is getting colder outside and at the campsites are only a few people left – seems to be autumn! The best time to test our new gear including warm sleeping bag and mat. So, we took a few days off and planned a trip with four cycling days. One day in between should be for relaxing – anyhow it is vacation 😉

With light rain we started quite early from Hemsbach. As the daylight wasn´t there already, we had to use our lights. When the rain got heavier later on, we were pretty glad to have waterproof stuff with us. As we cycled in the direction of Heppenheim and up into the mountains of the Odenwald, hardly nobody was out there in this weather. We met only some cows in the mystic fog. After freezing on the top of the mountains around Heppenheim, haveing a break in a bus top shelter, and surviving some pushing passages, we were really tired. But at least the weather was getting better.

Find an open campsite in autumn

After the hard climbing we could roll down in the direction of Aschaffenburg along fields and small villages. As the mountain part in the beginning had taken so long, we decided to shorten the route and choose another campsite at the Mainparksee. Sadly this one had already closed the camping season… So we got on our bikes again for another 8 km ride to Seecamping Mainflingen.

At this campsite we were lucky and got a nice place for our tent. As we built up our home base quickly, we had time for a hot shower and the preparation of some pasta with pesto. So we could get back the energy, that we lost during the cold and hard day. it was getting dark and cold quite fast we were lieing in bed already at around 8 p.m.