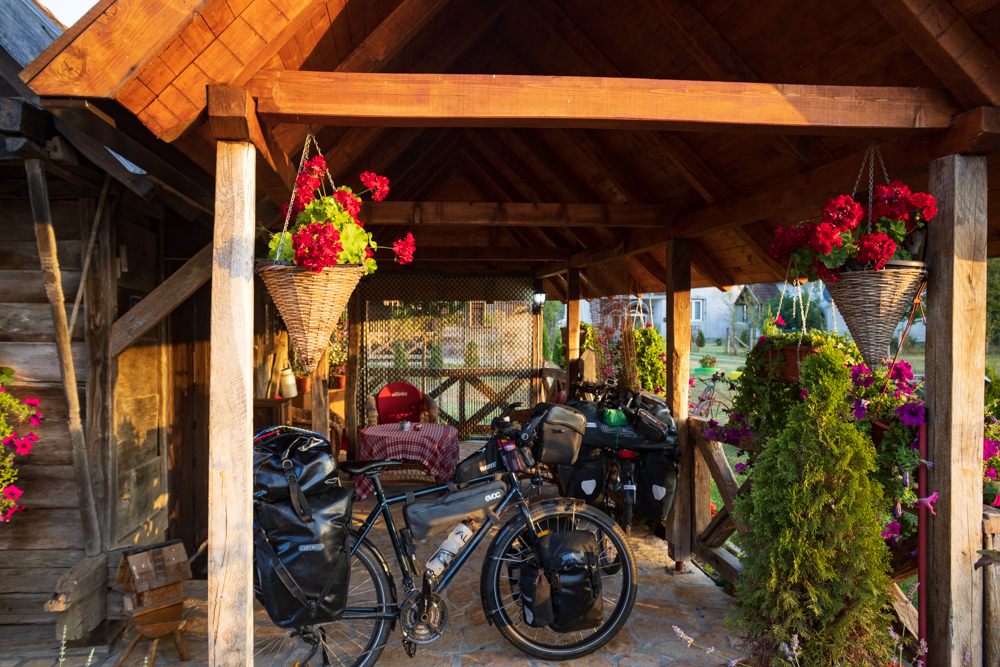 Terrace - parking spot for the bikes.

On our rest day in Slavonski Brod we first had to check when and where we could make a Covid test. We found out that there was a hospital just a few hundret meters away, where you could perform a test. The instructions for paying were not clear for us on the website, so we went there to clarify. And it was easier than we thought. One doctor could help us in English so we could fill out the documents and we also payed by cash. We should be there the next day around 7 o’clock in the morning.

We went back to our apartment. It was getting pretty hot and our room had an air condition so we rested there for some time. But of course we wanted to see something of the city, but also not walk around in the heat for too long. So we walked to the nearby Fortress of Brod from the 18th century built by the Austrian Habsburgs. On the areal were construction ongoing but still we could walk around. Part of the fortress was already renovated but some parts looked abandon. It was quite interesting but not many information were available on the spot. Afterwards we had a drink at the nearby restaurant and walked to our apartment through the old city.

Getting tested in the morning in Slavonski Brod

Before we could start the stage we went to our appointment for the Covid test. We were surprised when we arrived there how many people were already standing in line for the test. But the testing was quite fast, so we were done in almost 30 minutes. The staff told us that the results would be ready around 1 o´clock afternoon. We hoped to get the results faster but there was nothing we could do about. So we went back to the apartment and chilled there till we had to leave around 12. After some drinks in a nearby bar we cycled back to the hospital and got our negative test results.

Now we were ready to cross the border to Bosnia and Herzegovina. After some tiny problems with our navigation to get onto the bridge to cross the Sava and enter Bosnia and Herzegovina everything went well. This was the second border were our Covid tests were checked and we also had a little waiting time at the border. But then we entered the city Brod. We cycled straight to an ATM to get some cash (“konvertibilna marka”). Also we booked our apartment for the night. It was again a hot day and it was afternoon already so we wanted just to cycle a few kilometers.

Brod to Lužani Bosanski – The first ride in Bosnia and Herzegovina

When we left Brod behind we cycled on a major street which was quite busy from time to time. The heat and some of the drivers, which passed us very close, let us loose some nerves. Most of the time we were so focused on the street and the traffic, that we did not have time to look around. Though, there was not that much to see except some houses from time to time, trees and bushes, plus a lot of abondaned places probably leftovers from the war. So our route was not that long and we arrived early at our hotel. It was a really lovely and peaceful place where every apartment was a own little bungalow. Flowers and old wooden tools made a beautiful ambient.

At the restaurant we had a delicious vegetarian dinner. We got to know the “security dog” of the hotel and had some cuddles with him. Afterwards we went to bed early because we wanted to start our stage on the next day early to avoid the heat.