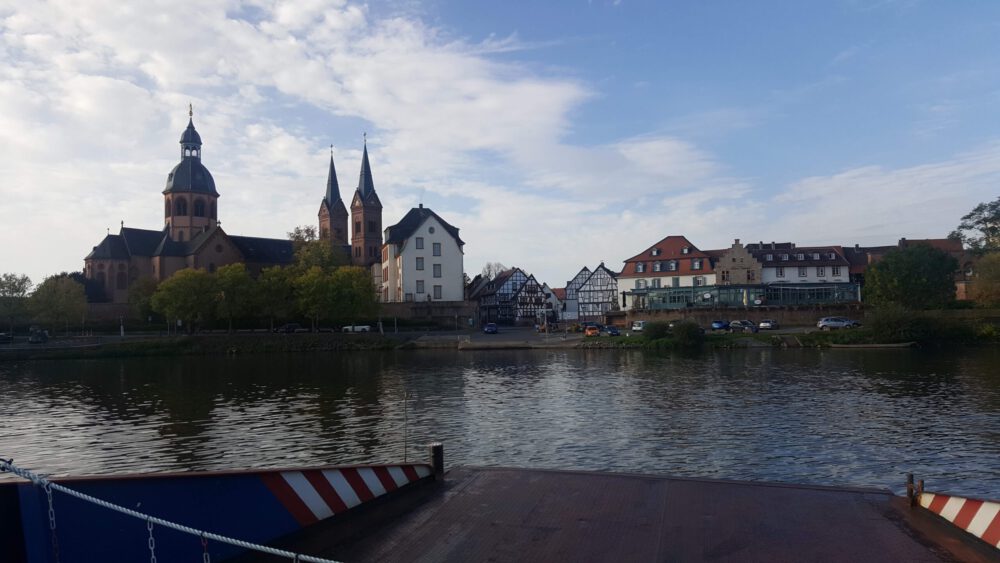 View over the river Main in the direction of Seligenstadt.

Mid of October 2019 brought us still a bit of golden autumn. So it was the best time to do one last overnighter tour for this year. We decided to go to Seligenstadt, a small town between Aschaffenburg and Frankfurt (Main). We started from Heppenheim and followed more or less small paths, often good elaborated bike routes and sometimes also forest trails.

After a few kilometers to the north we reached Eberstadt and had to turn more into the eastern direction. Here we passed Dieburg and Babenhausen but cycled mostly in parallel through the fields and forests. When we arrived Seligenstadt we had to cross the river Main on height of Karlstein am Main over a bridge. By this we also crossed the border over to Bavaria. Our final destination was located already a few kilometers behind the little town. We camped at the Campsite Karlstein/Grosswelzheim next to the beautiful lake Weißsee (Großwelzheimer Badesee).

A lot of space for us at the Campsite

As it was late in the year there were not many other people on the campsite. And of course we were the only ones with a tent. Two caravans arrived later that evening, so we had at least some neighbours.

We built up the tent and tarp quickly and after a nice shower we decided to go to a restaurant in the nearby town Kahl am Main. We found an italian restaurant (Trattoria Allegria) and had a delicious dinner and good beer. But after cylcing over 70 km that day we were also quite tired. So we went to bed early as we knew we would have to cycle back directly the next day.

It was a relaxed night and when we got up the weather was again relative stable and not too cold. We had a quick breakfast with some fruits and bread we had with us and then packed our stuff to start the return journey. We tried a bit of a different route to have some variety to the former day. This worked for the first part of the trip until Darmstadt, but the rest was the same as before. However, thanks to this changed route we had to take the ferry in Seligenstadt to cross the river Main. It was a short but nice ride over the river.

The different route back led to a lower amount of kilometers, but we were not sad about that. So we had some more hours left on that sunday to relax after this overnighter trip to Seligenstadt.