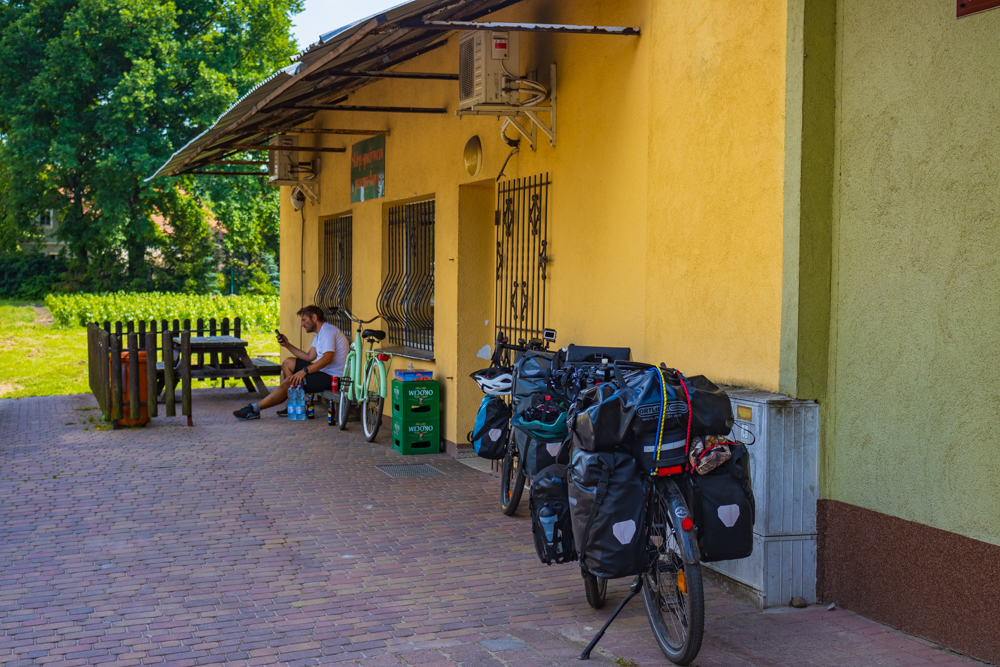 Definitely needed a rest - this "sklep" was like a miracel in the remote area.

We stayed only one night in Gostyń. Our stage to Wrocław would be more than 100km so we tried to start early. After breakfast at our hotel we got the bicycles ready. We wanted to continue the bicycle road R9 (Eurovelo 9) and the path led us to the Bazylika Świętogórska which was the first sight of the day. This was a really magnificent church and the only one in Poland in Gothic Italian style. Shortly after that we left the city behind.

We cycled for a long time on minor streets. The sun was shining hot and around us was almost only farm land. So there was little to no protection against the heat. Not many cars were around and the streets altered between solid and covered with potholes. From time to time we passed little villages and towns. The only breaks we made, were in front of special buildings or nice nature to take photos. It was mostly easy cycling, so we made good progress.

Comfortable resting place along the EuroVelo 9

After some time we came to the little village Ruda Sułowska. In this area were dozens of small lakes. Next to one of them was a little resting place where we took the chance for lunch out of our bags. After some time also a friendly older couple joined us. They were surprised about our huge luggage, but due to the language barrier we could not talk that much. After all, for a goodbye we could say a friendly “Do widzenia”. For the next kilometers we were lucky to cycle in a forest which protected us from the sun.

Sandy forest out of hell

But the forest had some unpleasant surprise for us. First it was nice to ride but after some time the unpaved way got very sandy. It was a dark black sand and from time to time there were big puddles of mud which we couldn’t avoid. So our bicycles and wheels got breaded and it was a very dirty affair. Due to the sand it was sometimes not possible to cycle and you had to push your bicycle. Also we were under attack of a lot of mosquitos most of the time. But finally we got through this segment and used the next “Sklep” to buy some refreshment drinks. Also it was time to get some dirt of the bicycles.

First serpentines in Poland and getting closer to Wrocław

When we passed the city of Trzebnica the R9 led us to our last little detour instead of going straight to Wrocław. We cycled already for hours and got tired and we had to climb our first small ramps in Poland. Little serpentines led us up on a hill and we had some really stunning views. But in our condition we could not enjoy them that much. A little later when we came closer to our goal we used our navigation to get to our apartment and left the R9.

The navigation led us along some very small and unpaved ways. In the forest we had to fight a very small way which looked like you could only drive there with a jeep (if, at all…). Also here we had to push the bicycles for some meters. Afterwards we came back to more solid streets and finally to nice bicycle streets. The closer we came to Wrocław the better the cycle paths became. And then we could finally see the skyline of the city and we were happy to arrive the city sign. Cycling there was not too bad due to the good infrastructure. There were many people around when we cycled a few kilometers along the river Odra which was a bit stressful. But we also had some nice views at the famous buildings of the city. We celebrated our arrival at the apartment with some fancy vegan pizza which we ordered and went to bed very tired. Of course, after cleaning all the dirt from our bodies 😜.